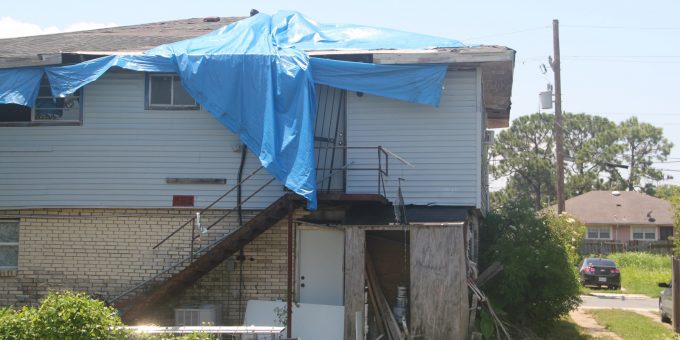 These are the all-too-familiar signs of civic neglect in mostly Black neighborhoods of the U.S., suffering in the wake of racist real estate practices like redlining, blockbusting, and predatory lending. They are also signs of climate change. The neighborhood decay looks nearly the same. But unlike unfair housing practices, for which people might expect some recourse, climate change heeds no complaints. The communities it grips may never be able to recover.

I live in New Orleans. It’s consistently mentioned alongside Miami, Houston, New York, and Washington, D.C., all of which are labeled as the United States’ most climate change vulnerable cities. And climate change is readily apparent here. Driving into the city on Interstate 610, through parts of New Orleans East, “blue roofs”—the blue tarps, many installed for free by the Army Corps of Engineers, that still cover buildings damaged over a year ago in Hurricane Ida—pinpoint the effects of intensifying storms and enduring civic neglect. As I write in late 2022, the blue roofs themselves are frayed at the edges, loosening from their temporary moorings to flap like worn sails. They never kept the heat and humidity out, anyway.

In fact, the neighborhood—majority Black and Brown—never fully recovered from disinvestment post-Hurricane Katrina, nor the devastating effects of COVID-19. It’s not all apocalyptic vistas in New Orleans East. It has its vibrant middle- and working-class areas, nestled among the dilapidations, but so many feel tenuous, unstable, ephemeral. Climate change will hit the Black and White sections of New Orleans East alike. Still, it will be the Black ones that suffer the most. The effects of climate change, as we know so well, will not be equally felt by everyone.

I should note here that I am a white, self-identified male, and middle-class. I do not live and work amid the poverty that mires many of my fellow New Orleanians. And I am sure many of them would vehemently disagree with at least part of my assessment of our city under climate siege. That’s fine and valid (and, of course, they don’t need my validation). However, it is entirely possible the current trajectory of climate change will be the death knell of neighborhoods of color, for the same individualist mindsets historically upending in neighborhood politics remain in force. It is doubtful that mostly White neighborhoods of any class will to “go to bat” for poor, working- or middle-class Black neighborhoods. No, Whites may mutter “That’s a shame” as they drive past the blue roofs, but many of us are unlikely to see the deterioration of those neighborhoods as a prelude to ours. Why should we? That’s not how neighborhood and race issues have played out thus far.This is the ugly elegance of institutional racism. You don’t need anyone running around in white hoods or with a Proud Boys badge for racism to occur. It’s built into everyday operations.

Areas like New Orleans East have always been marginalized. In turn, that produced a physical landscape that seems worn and torn. Anyway, “Have you seen the new Home Depot and that brand new apartment complex with the pretty trees?” The false hope of spotty new development as well as the “just more of the same” perception of blight obscures how climate change is strangling areas like New Orleans East.

It is here, in the realm of disinvestment, that we see the link between climate change and redlining. The FHA’s racist housing policies and profiteering by the real estate industry set the stage for climate change in areas like this. Climate change, like those practices, is making it nearly impossible to build the equity needed to maintain and repair property. As FEMA declares areas most affected by climate change “high risk,” and insurers respond by trying to hedge their risk via ever-higher premiums, property devaluation is speeding up. Soon, with banks’ mortgage loan rates on the rise, the entire real estate industry is sure to pull out altogether, just as it did with redlining. This is the ugly elegance of institutional racism. You don’t need anyone running around in white hoods or with a Proud Boys badge for racism to occur. It’s built into the everyday operations of institutions.

Businesses, big and small, face the same music. Many have already closed up shop, especially the big box stores that have long served suburban areas like New Orleans East. It’s a much easier decision to abandon their sites than it is for the small, independent business owner who lives in the area.

Last April, I received an email from my insurance broker: “Due to Hurricane Ida and multiple hurricanes in our area over the last 2 years the insurance markets have taken a substantial hit. Multiple markets have left the state and the companies still in south Louisiana have had significant rate increases.” The email goes on to say that the broker aims to still secure the lowest rates possible, blah, blah, blah, we are important to them, blah blah… The writing is on the wall: Insurance companies are leaving south Louisiana as a region. A few months later, the Louisiana Insurance Commissioner held a public meeting at the University of New Orleans to answer questions from anxious residents.

Climate change is here to stay. While the new Inflation Reduction Act of 2022 at long last has some significant spending to help get us off fossil fuels, increasing damage for at least the next several decades is already locked in. Policy discussions have already moved from prevention to adaptation. After Katrina, as the waters receded, national attention and investment flooded into the Lower 9th Ward, but it has not brought prosperity. It does not feel too bold to say that New Orleans East will not get better.

It’s clear I’m feeling pretty pessimistic, but I do have faith, including faith in generations younger than mine. As I have previously written about on this blog, they seem vigorous and ready to meet these challenges. It is the youth who will push us forward. One, a former student and newly minted Ph.D., tells me she used to argue vehemently that American institutions could be amended, that they could do the good intended by our nation’s democratic ideals. Now she is beginning to think they’re tear-downs. Perhaps it’s time to salvage the good and build again.

David Burley is in the sociology department at Southeast Louisiana University. He is the author of Losing Ground: Identity and Land Loss in Coastal Louisiana.