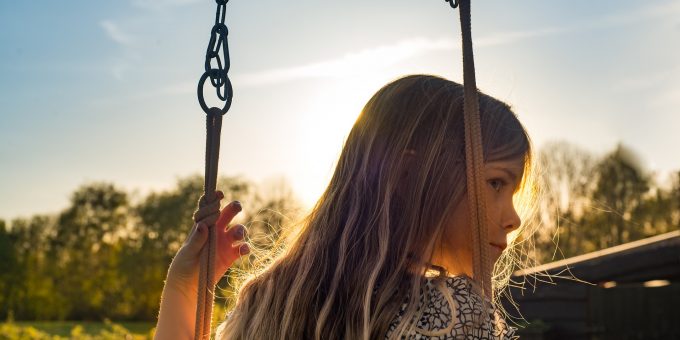 Growing Up is Harder to Do.2: After the Great Recession

More than a decade ago we published a piece in Contexts entitled, “Growing Up is Harder to Do” showing how the transition to adulthood was becoming more protracted and less homogeneous in the final decades of the 20th century. Young adults no longer finish school, find work, leave home, get married, and have children in a quick and orderly manner. This article served as an introduction to a decade-long program of research undertaken by a Research Network on Transitions to Adulthood, supported by the MacArthur Foundation (www.transitions2adulthood.com/). The Network was established to stimulate research on the sources and consequences of delayed adult transitions and to identify needed policies to make key social institutions better serve the needs of contemporary young adults.

This past decade has been a particularly tough period for young adults who were hard hit by the Great Recession and its lingering aftermath, with profound and potentially permanent consequences for the adult transitions of young men and women today. A rising proportion of young adults are finding it difficult to establish a secure position in the labor market. Completion of schooling and attending a post-secondary degree has become more difficult if only because college has become far more expensive for students and their families. Over the past decade national, state, and local governments have continued to off-load the rapidly rising costs of obtaining a degree to young adults and their families. Rising debt from education, combined with the troubled housing and labor markets, has led young people to postpone home leaving.

Accordingly, young adults have been more hesitant to enter committed partnerships, particularly marriages, and to begin childbearing. As reported in our earlier paper, a half century ago, the vast majority of both men (58%) and women (67%) had finished school, found full-time work, left home, married, and had children by age 30. The historic postponement of economic and family transition since 1960 is shown in Figure 1. By 2012, only about one-fifth of men and one-third of women had completed entire package of five transitions, a striking decline even from the beginning of the decade.It is uncommon now for current cohorts to complete the full sequence by even by age 35; adulthood, as traditionally defined, is now achieved only by a minority of men and women.

Since a growing number of young adults will never marry or have children, we have also calculated the trends just for what we previously identified as the first phase of adulthood: establishing economic independence (completing school, entering the labor force, and leaving home). This first phase of establishing economic independence also shows marked delays for both men and women for all age categories after 2001, with substantially less change in the four previous decades. No doubt, the Great Recession and its aftermath account for a good part (but not all) of the drop in attaining economic independence. We cannot know yet whether these changes are temporary or will be lasting.

The trend in later adult transitions raises the question of how young adults and, the population at large — figuratively speaking, their parents and grandparents — have altered their expectations for navigating the package of transitions that in the middle of the last century occurred swiftly, orderly, and uniformly. One of the final undertakings of the Network was to fund the inclusion of the same module of questions in 2012 that had been added to the General Social Survey (GSS) ten years earlier, on the perceived importance in the timing of the five demographic markers of adulthood.

Comparing the responses provided to the module of questions, asked first in 2002 and again in 2012, provides information on whether and how young adults (and older Americans) have altered their attitudes about the normative path to becoming an adult given the current realities of growing up.

In the GSS module respondents (younger and older adults) were first asked to rate the importance of making the various transitions “to be an adult.” If they said “very” or “fairly” important, then they were also asked “by what age” they thought the transition “should occur.” When examined together, the pattern of their responses to the questions provides a measure of whether or not norms have been shifting toward a more relaxed standard for attaining adult transitions or whether young adults are resisting normative change in the face of their inability to maintain the traditional schedule for coming of age.

Over the 10-year period, there are clear trends showing that fewer young Americans report that the traditional markers are extremely important to achieve to become an adult in the United States (Figure 2). There are significant and substantial changes among young adults in their assessment of the importance of reaching the traditional markers with a general trend toward downgrading the importance of each of the demographic markers. Most of the change is a shift from “extremely” to “somewhat” important suggesting that the set of adult transitions continues to retain some relevance. This is especially true for transitions to work, financial independence, and home leaving— the first phase of the adult transition. These trends in expectations are similar for older Americans. 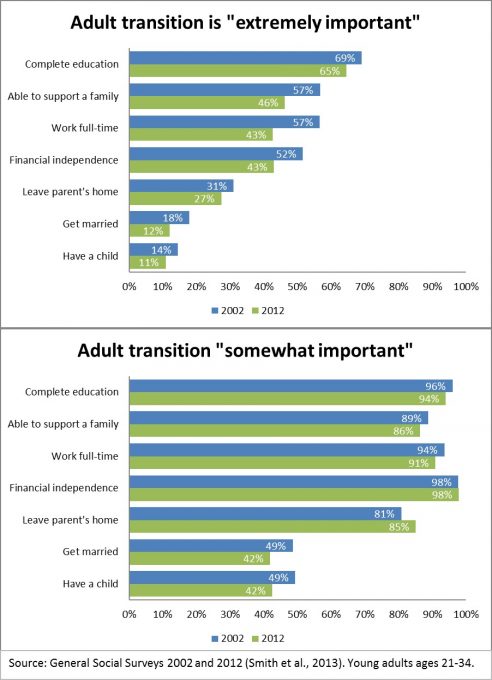 There was an even more substantial shift in the second phase of adulthood involving marriage and childbearing. By 2012, less than half of all Americans age 21-34, thinks that it is at least somewhat important to marry and have children to be considered an adult in American society. Just one in ten view these as extremely important. These familial transitions have become much more discretionary than they were just a few decades ago. During the past decade as the Recession unfolded, these normative shifts have been dramatic, showing that the importance of marriage and becoming a parent has diminished as a marker of adult status.

Expectations about the preferred timing of adult transitions changed much less consistently. Among younger and older Americans, there was a small shift toward later ages of about half a year for key indicators of economic independence (success): leaving home, becoming financially independent, and being able to support a family. The timetable for finding full-time work, finishing school, and for family transitions remained early and did not changed significantly. Despite the slight relaxing of age norms following the Great Recession, Americans continue to report an “unrealistically” early ideal age schedule for adult transitions. Figure 3 shows the growing proportion of young adults who are unable to meet these transitions on-time according to this largely stable early time-table for adult transitions. 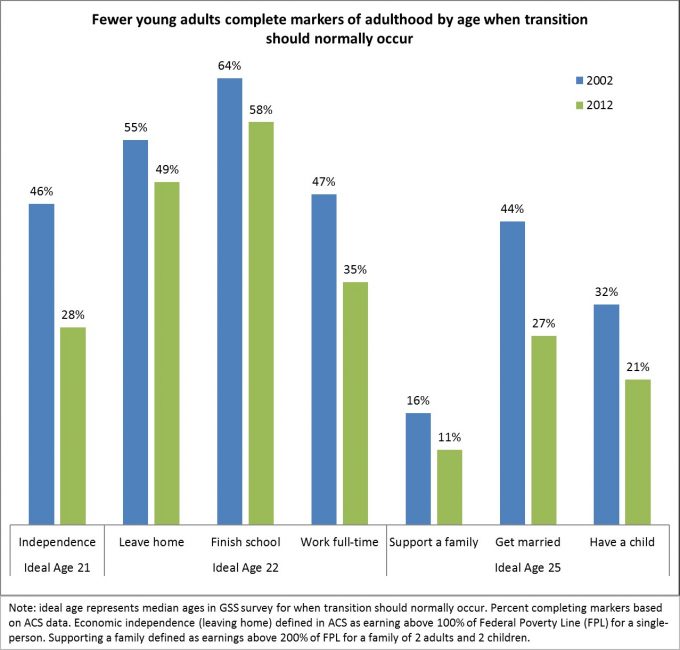 This shift in popular notions about coming of age is not unexpected. Sometimes normative change precedes behavioral change, as has occurred to some extent in gender roles. In other instances, however, behavioral change in the population ushers in shifts in cultural norms and expectations, as seems to be the case here where there is a growing lag between the preferred and actual timing of adult transitions.

Marriage and parenthood were once the hallmark of becoming an adult: they no longer are. Only a minority of younger and older Americans thinks that individuals become adults by forming marital unions and having children. These status changes are now regarded as more optional. We suspect that they are becoming more discretionary— not only because individuals want more freedom to make family formation decisions as they see fit, but also because a growing number of young adults are feeling less confident about whether they have the means to enter marriage and have children.

There also have been also some concessions in the importance placed on demographic transitions to economic independence as a marker of adulthood. Fewer Americans say the economic transitions are “very” important to attain adult status, but most continue to acknowledge the relevance of completing education, attaining financial independence, and leaving home for becoming an adult today. There has been a little relaxation on the timing of these transitions. If we concluded a decade ago that growing up has become harder to do, it would seem in the last ten years the passage to adulthood has become even harder today. Eventually, we expect that the normative path to economic independence will shift more fully to reflect the challenges of this life stage.

Thanks for this informative article from here you will play klondike solitaire game online without any pay and app installation.

This past decade has been a particularly difficult time for young people who have been hit hard by the Great Recession and its protracted consequences, with profound and potentially permanent consequences for the transition of adult men and women today. He got along with mypaperwriter. An increasing proportion of young people find it difficult to establish a solid position in the labor market. This is one of the finest post having good information.

We amazed using the evaluation a person designed to get this to specific submit amazing. Fantastic exercise!
Niche relevant blog comment