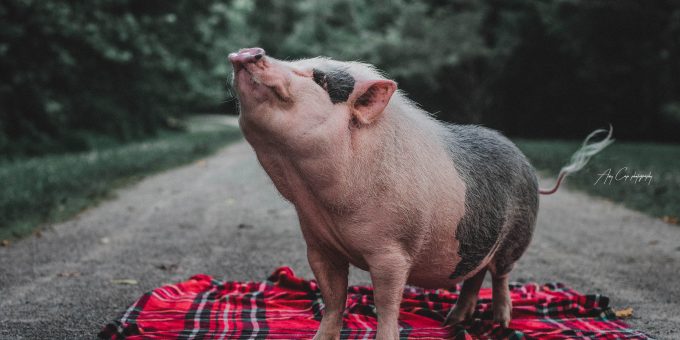 Of Pigs and Public Sociology

In 2013 and 2017, I was elected as a Council member in Leechburg, a town of about 2,000 residents. My platform included using the tools of public sociology to promote civil society. Among the many successes and failures of my tenure, none is as interesting, maddening, or farcical as a year-long dispute over a pet pig named Finley. In retrospect, the saga of “Finley the Pig” says quite a lot about the usefulness of public sociology in the political sphere and beckons for greater development of method and measure on local publics and moral dilemmas in public sociology.

In September 2017, Mayor Wayne Dobos, a Vietnam Veteran and retired steelworker, hand delivered a copy of a pet ordinance to Destiney and Cody Griffith, a newlywed couple who had recently moved to Leechburg. The Mayor explained that a neighbor had filed a complaint: Finley, their beloved pot-bellied pig, violated the borough’s livestock ordinance. Dobos gave the Griffiths two weeks to remove their pig from the borough. If they did not, he would instruct the police to enforce the ordinance.

Rather than acquiesce, the Griffiths decided to fight. They cancelled their honeymoon, created a change.org petition for Finley, called the local television news station, circulated the Mayor’s ultimatum on social media, and encouraged residents to show up to Council meetings to express their disapproval of the Mayor’s actions. The Griffiths demanded that Council acknowledge Finley as a pet and permit them to keep him in the borough.

The news of Finley spread quickly, not only locally, but across the country. The Griffiths’ petition garnered over 6,000 signatures—three times the number of residents in Leechburg. Outrage, mostly in the form of support for Finley, poured out across Facebook and other social media sites.For many in Leechburg, the issue went beyond a couple’s pet pig. Finley became a symbol for all kinds of fears around community change, law and order, and personal freedom.

For many in Leechburg, the issue went beyond a couple’s pet. Finley became a symbol for all kinds of fears around community change, law and order, and personal freedom. Noticing how heated the situation was becoming, I moved to temporarily suspend the ordinance, stopping the clock on Mayor Dobos’s ultimatum. It would allow some time to pass, for cooler heads to prevail, and for the Council to visit remedies with our solicitor.

Our next Council meeting drew the largest crowd I’d seen in my tenure. Where, normally, attendance hovered at about four or five locals, this meeting saw 40-some residents alongside television crews and journalists. The Mayor came ready to punch; he demanded that order would be maintained, instructed police to arrest provocateurs, and delivered a statement chastising the Griffiths for their activism and undercutting Destiney’s assertion that Finley was a therapy animal helping with her anxiety disorder. Attendees, including Destiney’s father—a towering, muscular man—called the Mayor’s comments disrespectful.

Council later concluded that the pet ordinance had not been regularly enforced, and that other residents were clearly in violation, too. Among the pets that would need to be ejected from Leechburg were not only Finley, but goats, chickens, ducks, and a peacock, too. It looked as though suspending and redrafting the ordinance were the only possible paths.

After nine months of discussion, cooling off, and an election, we were ready to vote on the ordinance in May 2018. The new ordinance focused on pet and property size rather than species, mandating owners of outdoor pets to have enough property so pens and enclosures could set far enough away to not bother neighbors. The ordinance passed in a narrow vote.

In the June meeting, the Mayor vetoed the new ordinance citing issues unrelated to its drafting or content. I immediately motioned for an override vote, but came up one vote short. To everyone’s surprise, Mayor Dobos’s veto stuck.

In the July meeting, the solicitor determined that his veto reverted the law back to the old ordinance, which was under suspension. Finley would be able to continue to stay in town, but Council would be back to square one on a new ordinance. In the meantime, the once-feuding neighbors had more-or-less worked out their issues about Finley on their own. Council members were ready to move on to other issues—like what to do about Kevin the Peacock.

The Application to Public Sociology

Public sociology’s ideal supports civil society (community standards) against state despotism and market tyranny, but sociologists are left without a common method and measure for what action should look like. The Finley-the-pig saga provides some useful insights.

First, the common examples of public sociologists in elected positions are most often leaders on the world stage, suggesting the sociologist hoping to make change has to “go big or go home.” My experience suggests instead that the most effective method is “go small and build up.” Local issues, as trivial as they may seem, are often analogs of fundamental debates in broader civil society. If sociologists can help their communities navigate local debates, they will make fundamental, albeit anonymous, contributions to the national discourse.When it comes to measures in public sociology, my experience in local government can teach us that successes are embedded within failures.

Critics of public sociology state that civil society is “hardly the idealistic public sphere” and unlikely to be receptive to sociologists’ prescriptions for change. This overlooks the notion that most issues in civil society are localized and thus require localized public sociology. The Finley episode wasn’t just about a pet ordinance; it was a symbolic vehicle for discussions conceptualizing community change, enforcing order, and ensuring personal freedom. As I helped my community work on these issues, my efforts were welcomed by all and accepted by most. I even became known as the Council’s “voice of reason.” More concretely, I received 68% of the vote in my reelection. This level of reception for sociological prescriptions for change is especially striking considering that I reside in a Southwestern Pennsylvania county in which Trump received 74% of the vote in 2016.

When it comes to measures in public sociology, my experience can teach us that successes are embedded within failures. I wish I could tell a story about passing an ordinance based on community standards to the cheers of grateful citizens and a newly supportive Mayor. That’s not what happened. Still, I can say that I helped our community come together, engage the issues Finley symbolized, become more active and aware in local political life, and succeed in preventing a small, local version of “state despotism.”

It will always be difficult for public sociologists to stimulate government into being a vehicle for civil society, but it’s not impossible. In my experience, it can work at the local level. Now, go run for local office!

Christian Vaccaro is a sociologist at Indiana University of Pennsylvania. He is also a Council member in Leechburg, PA and serves on the local library’s board of directors.

Great story but consider me confused. Where was the "public sociology" in this tale? I appreciate the concluding points but I am not sure how Christian took advantage of his sociological training/imagination/tools. It seems the most important thing that happened was delaying the decision long enough for cooler and more pig-friendly heads to prevail. Please explain to this interested party.

This article reminds me the effets of "double hermeneutics" (Giddens)
Thanks

What an impressive comparison
run 3

To be honest I even did not read this article. I have no time because I need an essay help https://ukessay.com/essay-help and hope I will get it soon. This is a serious problem because I have only time for commenting this, not for the article itself.

Wow, that's really interesting story. Finley-pig looks so funny. By the way, my friend is a professional writer at http://do-my-assignment.com/buy-essay-australia and u can order a lot of essays and articles there. I even found a similar story there. Thanks for sharing this wonderful post.

Hey! I am Ralph fennec, i am running a company named Fennec Safety, Our basic aim is to provide the CRM Training and security consultation to the people, they can build the leading ability through the CRM Training and many more things. For any other update and information you can connect through my website.

Hey! I am Ralph fennec, i am running a company named Fennec Safety
LINK :https://fennecsafety.com , Our basic aim is to provide the CRM Training and security consultation to the people, they can build the leading ability through the CRM Training and many more things. For any other update and information you can connect through my website.

Hey, bro! Nice story. I want to recommend you the best casion in the world https://videoslots.com. Free spins, welcome bonus and a lot more you will find here. Good luck

CITI Training Responsible Conduct (RCR) License The CPTC provides training opportunities to individuals who would be interested in obtaining a CITI license. To qualify for this training, a candidate must successfully complete either: a CITI trainee education course

Hello, I would like to thank you for sharing this material. I'm sure it will be useful for a lot of people. I will use it together with https://mid-terms.com/project-management-essay-help source.