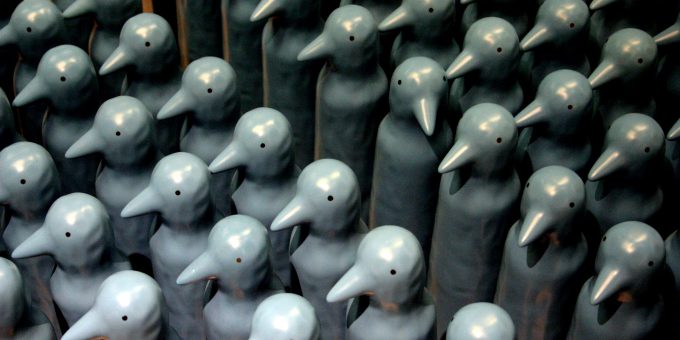 On the morning of November 9th 2016, many democratic-oriented Americans updated their Facebook timelines, unhappy and frustrated about a rather unexpected outcome in the U.S. presidential election. People were particularly shocked that they had not seen this outcome coming. Naturally, they sought explanations for their surprise. Fingers were soon pointed at online “filter bubbles” or “echo chambers,” in which individuals are increasingly surrounded by like-minded people with similar political views or similar race or ethnic background.

This phenomenon, however, is far from new. Since the 1950s, sociologists have found that “birds of a feather flock together.” Over the last two decades, scientists have shown repeatedly that people forge friendships with those who are similar to them. This “homophily” has serious implications for the diversity—or lack of diversity—of opinions, attitudes, and prejudices that one may be exposed to.Offline homophily, or the tendency for “birds of a feather to flock together,” is largely reproduced in online networks, to the detriment of one’s exposure to a diversity of opinions.

Our study in the American Sociological Review examined the ethnic and gender diversity of social relationships on Facebook among 2,800 Dutch adolescents, who together had more than a million Facebook friends. What did we find out? Those who have ample opportunities to befriend similar others—for instance, those who belong to a racial or ethnic majority group—will find themselves in highly segregated Facebook networks. Additionally, making friends on Facebook is highly affected by the schools, neighborhoods, or associations one belongs to: if these are segregated, Facebook networks will segregate. Of course, this is rather intuitive: adding a Facebook friend is likely to result from having met someone in an offline context.

In this light, it is not such a surprise that people experience rather homogeneous Facebook networks. It turns out that segregation on Facebook and, hence, echo chambers or filter bubbles reproduce our highly segregated offline settings. If people surround themselves only with people of similar backgrounds, this will be mirrored in a set of Facebook friends exclusively of these backgrounds.

Bas Hofstra is a postdoctoral research fellow at Stanford University. His co-authors on the original article are Rense Corten and Frank van Tubergen in the department of sociology at the Utrecht University and Nicole Ellison, on the faculty at the University of Michigan School of Information.

I am very happy to know about the highest game option provided where you have authority start to game whenever you want and this is also in your hand to quiet the game yahtzee. If you have this type of the settlement option then you can manage it according to your need and in which view you feel the comfortable.

Thanks for such a nice article , want to use more features on whatsapp, click on fmwhatsapp

I am not interested in this and I don't spend time on this. Because my hobby is writing an essay. I spend more time on interesting topic sites which I can write an essay easily. I have followed some topics for a research proposal site this site have very gorgeous and study-related interesting topics. With the help of this site topic, my interest is increasing day by day to write an essay.

Great article, use and download Lucky Patcher is an application to modify games, software, applications, block ads for free on your phone.

I need a good topic for my presentation for Create a Wikipedia Page . The only thing i can think of is segregation in social networks under the influence but i really don't want to do it on this.

Get excellent web hosting in advance as well as they can support you. This is with technological support, back-ups of your information, and also understand just how and also tools when something is interrupted.more information visit here : Personal Hosting

Thank you for your post. I have read through some similar topics! However, your post gave me a very special impression, unlike other articles. I hope you continue to have valuable articles like these or more to share with everyone! paper io 2

I'm a content writer and know about the writing skills very deeply. I'm writing content for blogs and websites from a long time. Most of the popular websites must have my content published on them. I want to suggest students to hire any professional writer to do their college essay work because you can learn many new things from their writing. Also, I want to show you my writing so that you can learn things from it. I have recently published Spyera App Reviews for Android, iPhone, macOS & Windows and you must read it.