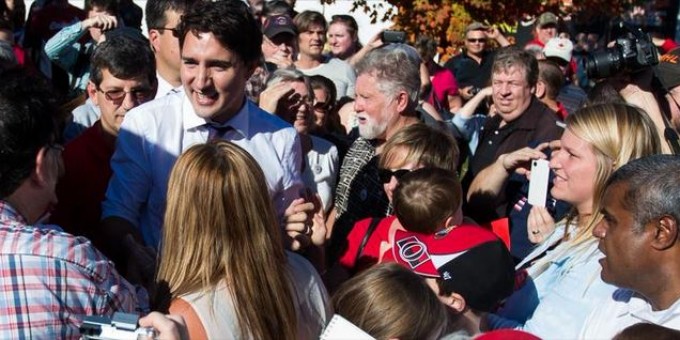 Justin Trudeau in the crowd. https://twitter.com/JustinTrudeau

Something’s going on North of the border, eh

Canadian elections and politics rarely crack the front pages of international newspapers or gain the spotlight of global media. However, the 2015 race was the exception. The New York Times ran an op-ed on the “closing of the Canadian mind”, the Guardian mused if the country’s conservative era is over, and comedian John Oliver, on HBO’s Last Week Tonight, violated Canada’s elections laws by going as far as asking Canadians to vote against the sitting Prime Minister, Stephen Harper. So, why all the attention and why should sociologists care about Canadian politics?

Over the course of the last decade Canada has changed profoundly. The Conservative government reoriented the nation’s economy westward with heavy promotion of its tar sands and oil pipelines. In doing so the country became an environmental pariah with the government resisting climate action policies and undoing the country’s environmental protection laws. This is not to mention that the Conservative government waged a battle against research and science, leading to claims that both were “muzzled” over the last decade.

Outgoing Prime Minister Stephen Harper also specifically targeted sociologists, using the term “commit sociology” to dismiss investigation into issues of social justice. He originally bandied the term against the new Prime Minister, Justin Trudeau, who was then a third party opposition leader of the Liberals and advocated looking into the underlying “root causes” of terrorism after a foiled bomb plot instead of aggressively increasing the country’s war on terror. Harper also used the term in his justification against striking a commission to investigate the causes of the high number of unsolved murdered and missing Indigenous women cases in the country. One might actually argue that the October 19th election was fought over whether or not the country would “commit sociology” versus pursuing neoliberal policies.

The adage “it’s the economy stupid” certainly doesn’t fit the election. The Conservative government led the country into two economic recessions, increased debt, posted repeated deficits, and saw the Canadian dollar lose about a quarter of its value. As its credibility on the economy was increasingly questioned, the Conservative government turned to distraction politics. Like Donald Trump, who made outlandish comments against “illegal” immigrants and Latinos, or the UK’s David Cameron, who blamed the poor and migrants for its weak economy, Stephen Harper’s conservatives tried to make wearing the niqab during citizenship ceremonies a wedge issues.

Earlier in the year the Conservative government commissioned a poll that found that over 80 percent of Canadians felt that women should not be allowed to cover their face during the ceremony and supported a policy to ban the niqab during citizenship oaths. Sentiment was even more concentrated in the province of Quebec, which experienced a turbulent debate over “reasonable accommodation” of immigrants during the 2000s. Although the Federal Court of Appeals ruled such a ban would be unconstitutional, a desperate Conservative government announced with four weeks left in the election that it would appeal the decision and even go as far as creating a hotline to report “barbaric cultural practices.”

Over 500 academics across Canada signed an open letter against the Conservative line of tactics, and in a country where 1 in 5 people are immigrants, the proposed policies were met with much concern. At the same time the leader of the official opposition, Thomas Mulcair of the left leaning New Democratic Party (NDP), fiercely defended women’s right to wear the niqab in a national debate. His base of support was in Quebec, however, and it began to waver in polls almost immediately after. Trudeau shared similar views on protecting constitutional rights but was perceived as more moderate on the issue. He also campaigned on a pro-deficit platform to reverse the sluggish economy, which made his platform appear more progressive. Combined, this led to a movement of support away from the left leaning NDP across the country to the Liberals to avoid splitting the vote in order to defeat the Conservatives and promote change.

One of the things that most observers of Canadian politics are quick to note is that the country’s electorate is volatile and quick to punish governments for their misdeeds. In the last election the Liberals faced the rise of the left leaning NDP, what was branded the “Orange Crush” because of the party’s colours, and in 1993 the Conservatives went from a majority government of 156 seats in parliament to just 2. In this election we can see a similar momentum of voting against the Harper Conservatives, which led to strategic voting that worked in concert with a well-run campaign by Justin Trudeau.

All the attention on Canada’s election is well deserved because the country’s politics are complex and because it buck trends seen in other countries. In this election we see that Canadians did not vote for oversimplified austerity or nativist policies. Instead they voted to commit sociology, they voted for change.

Howard Ramos is in the department of sociology and social anthropology at Dalhousie University. He is the author (with Karen Stanbridge) of Seeing Politics Differently: A Brief Introduction to Political Sociology.

I am already here this site windows 7 support end date now share this link to all users.