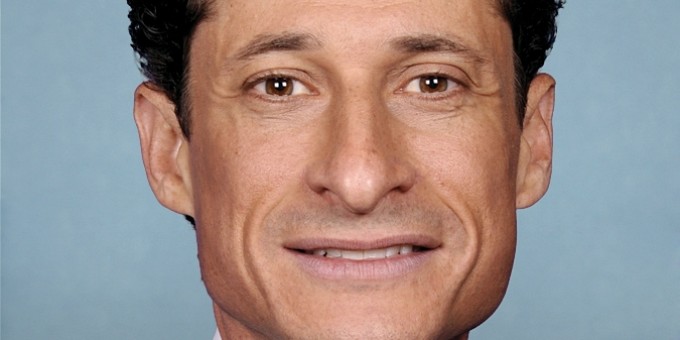 “Shit, this is the worst,” Anthony Weiner declares to himself at the beginning of the titular documentary (now in theaters), as he waits for someone to answer his phone call. “Doing a documentary on my scandal.” It’s a rich and telling introduction. Here is former New York Congressman Weiner, the willing star of “Weiner,” whose career lived and died by the media, complaining on camera about being on camera. It appears both an honest complaint and a disingenuous one. Even more than the remarkably up-close account of political ambition and strategy in the face of public shaming and private turmoil, that ambivalent relationship to publicity is perhaps the film’s most interesting theme. In “Weiner,” which follows its scandal-laden protagonist as he campaigns for Mayor of New York, we watch Weiner engage not just in a fight for his political life, for which he is apparently willing to take flogging after flogging, but even more in a fight over his story and his image. For that, the camera is both enemy and ally.

At its core, “Weiner” is a rare behind-the-scenes look at the relationship between politicking and media. The film tracks Weiner, his wife Huma Abedin, and his campaign team as they attempt to steer the Weiner ship, badly damaged by one sexting scandal that forced his resignation from Congress (picture of underwear-clad erection sent to woman via twitter) towards redemption through Mayorship. They catch a powerful wind of support only to then run aground on a second sexting scandal (more penis pictures and salacious texts and phone calls). The filmmakers do not dwell much on the details of Weiner’s techno-sexual activity, which, as The Nation’s JoAnn Wypijewski pointed out at the time, involved “no contact, no fluids, no baby, no payment, no strings.” Weiner says he had a “blind spot,” it was like playing video games, that maybe politicians tend to like attention, but we never learn what actual desires and pleasures were involved. For “Weiner,” the scandalizing sexual behavior is beside the point; the film is interested in how scandals affect political campaigning. The answer comes in an excruciatingly dreary and often gripping story, over terrain already familiar from decades of sex scandals, politician-entertainers from Reagan to Trump, plus Scandal and The Good Wife.

Nobody escapes with much dignity. Weiner is self-deprecating and self-aggrandizing, sometimes at the same time, desperately tenacious, easy to anger, prone to petulance and preening. Abedin, a close Hillary Clinton aide, veers between public protection of her husband’s image and private resentment of the “nightmare” she’s in, at once wounded and coolly calculating. A publicity-seeking young woman named Sydney Leathers, whose story breaks the second scandal, quickly signs with a porn company to make a video called “Weiner and Me.” Reporters fight each other for little pieces of the scandal, ignoring Weiner’s pleas for questions about bike lanes, housing, stop and frisk. (They ignore, too, the irritation of people like the Bronx woman who, in one of the most refreshing moments of the film, interrupts a crowd of reporters peppering Weiner with scandal-related questions, screaming, “Who cares about this issue? We want to know what he’s going to do for us. We’re from the Bronx, we don’t care about this personal garbage.”) On his HBO show, Bill Maher reads Weiner’s sext exchange verbatim with Jane Lynch as the audience guffaws; on his MSNBC show, Lawrence O’Donnell asks, from a horse of dizzying height, “What’s wrong with you? And I mean it from a psychiatric level.”

The publicity maneuverings sometimes yield slapstick. Towards the end of the movie, for instance, after Weiner sinks from the top of the mayoral polls to the bottom, he finds out that Leathers, trolling him at the behest of shock-radio host Howard Stern, has crashed the campaign’s party, at which Weiner is due to give his concession speech. Abedin refuses to “face the indignity of being accosted by that woman,” but then agrees to go anyway, and sits in the car with her eyes closed until Weiner, seeing that he will have to dodge Leathers, sends her home. Weiner jumps from the town car and dashes through a McDonald’s towards the venue’s back door, with Leathers running after him, fast, in a tight dress and heels, pushing people aside and calling, “Are you serious? Really?” It’s basically a parade of assholes.

They aren’t only that, though. While Leathers and the reporters remain caricatures, Weiner, Abedin, and the campaign staff do not. Weiner is flawed but trying not to be, fighting himself on his “virtually unlimited ability to fuck up things.” Abedin is wronged but trying to allow herself to be righted. Both of them saw the campaign as Weiner’s way to “clean up the mess” he’d made of his career and their lives, and cannot quite fathom that Weiner has made a bigger mess. The film offers a view of the impact of a media scandal at the interpersonal level, too, not just by showing us Weiner’s strained, tense marital relationship–throughout much of the film her arms are crossed or she’s shaking her head; he is full of guilt even as he asks her to act like “a regular candidate’s wife”—but also the pain and anger of staffers.

In the end, though, “Weiner” is not mainly a tale about an individual with an Achilles heel, or the costs of blind ambition, or even scandal. It’s an inside view of the normal operation of politics in an era when entertainment has long since blended with what might nostalgically be called news, and when the lines have long since blurred between public and what might nostalgically be called private life. Indeed, “Weiner” follows the path typically followed by scandal discourse, in which the scandal reveals not so much a breach of sexual norms as the pathologies generated by routine institutional behaviors. At the time of Weiner’s scandals, in fact, reporters and commentators—especially those outside of the tabloid press—covered the scandal through the lens of political gamesmanship, not just individual stupidity or immorality. A high-profile New York Times Magazine article, the centerpiece of Weiner’s reemergence in the “Weiner” period, detailed his “Post-Scandal Playbook.” When the second scandal broke, The New York Times reported that it undermined “the narrative Mr. Weiner has offered throughout his campaign, in which he has repeatedly suggested he has spent his time since leaving Congress rehabilitating himself and repairing his family relationships,” while a Washington Post writer wrote that it “damaged the remorse-and-redemption theme that fueled Weiner’s mayoral bid.” Politics: it’s all narratives and themes and playbooks.

The Weiner documentary, too, presents a world in which politicians are, by necessity, strategic performers. We watch Weiner practice the line, “For that, I am profoundly sorry,” seeking perhaps the most sincere-sounding expression. When his communications director, Barbara Morgan, read him reporters’ questions on a car ride, we see him searching not for the true answers, but for the answers he has given in the past. After his sudden drop in the polls, we watch him step into a “New Yorkers never quit” persona that he and his advisors have designed for the occasion. Such tactical behavior comes as no surprise, and that is the point: We are watching politics as usual, the politics in which reality television is a credential for the Presidency, brought into sharp relief by the crisis of scandal.

Weiner himself claims to see it this way. Reflecting midway through the film, he moves quickly from mea culpa– “I did the thing”–to political realism. “I understand politics and understand the rhythm of the press,” he says, “so it’s not their fault that they played their role. It’s the frog and the scorpion.” Later, in a discussion of the documentary itself, he says he has no regrets. “I wanted to be viewed as just the full person that I was,” he says. It’s hard to doubt that, but given that we’ve just witnessed Weiner’s failing battle to control his own story, it’s also hard not to. “Weiner” encourages us to see it as another performance, another role, another bid for narrative control. Sometimes, the frog just has to take another scorpion on its back and hope not to get stung. It’s the worst.

Joshua Gamson is in the sociology department at the University of San Francisco. He is the author of Claims to Fame: Celebrity in Contemporary America, and most recently of Modern Families: Stories of Extraordinary Journeys to Kinship.

The article shows some burning questions and issues
which should be discussed and explained. Moreover, it is essential to understand within the detail.
From the article, an individual can easily locate something basic, unusually for
him, something which will be hugely helpful. So I am thrilled
with the data that I have just got. Thanks
a lot!

Hey, bro! Nice story. I want to recommend you the best casion in the world https://royalslots.com. Free spins, welcome bonus and a lot more you will find here. Good luck