What is the Sexual Life Cycle of Those Who Ever Have a Same-Sex Partner?

A growing proportion of Americans have had a same-sex sex partner at some point during their life, especially among women (as we show here and here). But does knowing this tell us something about the sex of their sex partners at other points of their lives? For example, how many have also had a sex partner of the other sex some time in their life? How many have only same-sex sex partners going forward and how many revert to heterosexual relations? The ideal type of data to answer this question is a panel study that interviews the same people multiple times across the years and asks them about any recent sexual partners each time. Unfortunately, no such study exists using a large national sample.

We can, however, get some hints about the sexual life cycle of those who report at least one same-sex sex partner by analyzing data from the General Social Survey (GSS). The GSS asked people how many male and how many female sexual partners they have had since age 18 and in the last year. In this blog, we use data on adults age 18 to 69 from all years of the GSS after 1988, when the survey started asking about same-sex sex partners. Given the increasing interest in those who identify as neither male nor female, it is unfortunate that the GSS does not include gender options other than male and female (such as nonbinary) when asking respondents about their own gender or when asking about their sexual partners; everyone is classified as either male or female, as are the partners they report on.

In this post, when we say someone has “ever” had a same-sex partner or both male and female partners, we mean since age 18. In addition, note that we omit from our analysis any respondent who was missing data on any of the questions about their sex or the sex of partners they have had ever or in the last year. Finally, when we note that a difference between women and men is significant, we mean statistically significant, using the criterion of p<.05 on a two-tailed test.

Of all those surveyed since 1988, 7% of men and an identical 7% of women said they had ever had a same-sex sex partner since age 18.

Of these 7% of all people who have ever had a same-sex sex partner, a large majority have also had sex with at least one partner of the other sex; as the graph below shows, 73% of men and 86% of women who have ever had a same-sex partner have also had at least one partner of the other sex. In some cases, people who later determine that they are gay, lesbian, or bisexual have heterosexual sex early in life, because the heteronormative culture around them gives them the impression it is the only acceptable thing to do. (An earlier post of ours showed that a majority of even those who identify as gay or lesbian have had at least one other-sex sex partner.) But why is the proportion lower for men than women? This may be because those men who are attracted largely to men can simply avoid sex with women by not initiating. In contrast, because male initiation is the norm, women attracted largely to other women will still often encounter men trying to initiate sex with them. The higher percentage for women could also reflect more sexual fluidity or bisexuality among women than men.

The graph below shows that, for both men and women who have ever had a same-sex sex partner, most have only other-sex sex partners in the past year. Interestingly, this was more common for women than men—54% of women versus 42% of men, a large and statistically significant difference.

Some of those who have a same-sex partner early in their life do so because it is the only option consistent with their attractions, and this remains their pattern throughout their life. But our analysis points to the fact that the majority of those who have a same-sex sexual partner at least once in their life do not make this a life-long pattern. First, a large majority (86% for women and 73% for men) have also had at least one partner of the other sex. More strikingly, if you had to predict the sex of any sexual partners in the last year of someone who has had sex with a same-sex partner at one point, predicting that they had sex only with partners of the other sex last year would be a safer bet than predicting that they had sex only with same-sex partners last year. This is true for both men and women (although more so for women than men). What does this tell us? For some people, this may reflect experimentation with same-sex sexuality followed by discovering that they prefer heterosexual partnerships. For others, it may reflect that the social pressures of heteronormativity pull them back to relationships with those of the other sex despite an ongoing sexual interest in same-sex partnerships. To further illuminate these dynamics, we sorely need quantitative panel data on sexual relationships over the life cycle as well as qualitative interview studies asking men and women about the history of their attractions, constraints, and identities. 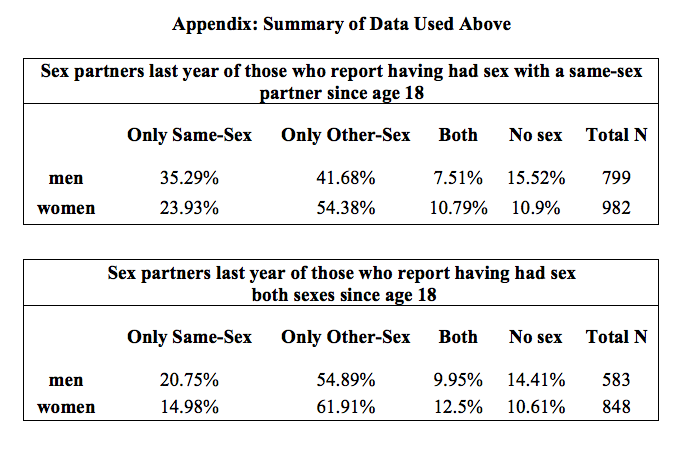 This is very interesting! I wonder, though, what the results look like restricted to those with multiple partners in the last year. After all, everyone who has had only one sexual partner will have had "only" opposite-gender or same-gender (if those are the only options given) partners, even if during a broader span of their contemporary adulthood they have both male and female partners.

As this is the most important way to get the fifa 19 hack here and we should be all knowing about the game.

This blog is so incredible. Andi must say that the writer defines the sex life of Americans and also they provide best coursework writing service to understudies. Thanks for sharing this kind of poll and pieces of information with us.

Your article is very good, help me better understand homosexuals. Thanks for sharing this helpful information.
fnaf

Very difficult for many of us straight guys to find a good woman these days, that is for sure.

Hello everyone i Am Ben and i am from USA i am here to give my testimony about an herbal doctor called Dr, olu I was heartbroken because i had very small penis,not nice to satisfy a woman, i have been in so many relationship, but cut off because of my situation, i have used so many product which doctors prescribe for me, but could not offer me the help i searched for. i saw some few comments on the internet about this specialist called Dr, olu and decided to email him on his email i saw on the internet,(Dr olu) so I decided to give his herbal product a try. i emailed him and he got back to me, he gave me some comforting words with his herbal product for Penis Enlargement, Within three weeks of me use it, i began to feel the enlargement, " and now it just 4 weeks of using his products my penis is about 8 inches longer, and i had to settle thing out with my ex girlfriend , i was surprised when she said that she is satisfied with my performance in bed and i now have a large penis.thanks to Dr olu for is herbal product. you can also reach him with though is..number WHATASPP him today on this number [ +2349025046428 ]