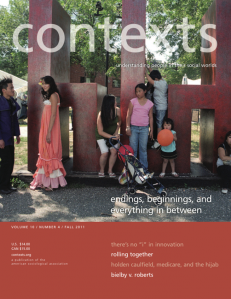 Civic recreation and fitness fundraisers, challenging the myth of the lonely genius, and the sociology of death and dying. This issue also explores international adoption, images of everyday life, and the marketing of “closure”.
Download this issue
Previous Next

New Ways of Bowling Together

In his 2000 book Bowling Alone, sociologist Robert Putnam argued that American civic engagement was dying. Now, Peter Hart-Brinson uses research on the convergence of the fitness boom and the creative fundraising efforts of nonprofits to show how civic engagement is being revived as civic recreation. Its social roots are examined, along with its implications for community and democracy. Read More

Up Close and Communal

Photographer Wing Young Huie’s images of the everyday establish and emphasize the connections between the personal and the communal. This article uses a set of Huie’s landmark images to explore the photographer, subject, and viewer’s shared fascination with the reflected quotidian. Read More

Bill Bielby | One Thing I Know

Bill Bielby reflects on his role as an expert witness for women seeking class action status for a discrimination suit against Wal-Mart. He argues that sociologists must take the stand to point out the difference between policies and practices. Without expert testimony, courts can too easily believe that discrimination ends when well-intentioned policies are put in place. Read More

A Life-and Death-in the Classroom

Monte Bute is many things: an admired sociology professor, a dedicated community activist, an author and blogger, and a friend and one-time board member of … Read More

Holden’s Hold on the Censors

J.D. Salinger’s novel The Catcher in the Rye has been on bookshelves since the 1950s—and its presence there has been protested for almost as long. This review explores why that Holden Caulfield can still elicit such social opprobrium in a new millennium. Read More

Debra Rigney | What I Learned

An undergraduate sociology student writes about observing the creation and replication of gender norms in a preschool classroom. Read More

Land Management and the American Mustang

The mustang has long been a symbol of the American West: wild, untamed, free, rugged, individual. Today, though, actual wild mustangs are at the center of a civic controversy, and their populations are controlled by the U.S. Bureau of Land Management and contested by ranchers, environmentalists, animal welfare groups, historic preservationists, and others. Read More

The Store—and the Nail Salon—in the Hood

Two recent books, The Store in the Hood and The Managed Hand, are compared and reviewed as sociological in-roads to diverse, inner-city economies. The books both show how the conditions under which ethnic entrepreneurs and their customers meet are shaped by forces beyond the control of either group. Read More

Socialism and Neoliberalism in Chavez’s Venezuela

Since 2004, Hugo Chavez’s government has put resources into creating citizen support through cooperatives, councils, community media, and other participatory initiatives. But, as Sujatha Fernandes writes in Who Can Stop the Drums?, this support comes with strings attached. Read More