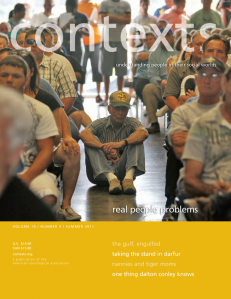 The BP oil spill one year later, social science on the witness stand in Darfur, and an inside look at the public occupation of the Wisconsin state Capitol. Also in this issue: how to make sense of rumors, a followup on American Apartheid, and The Wire goes to college.
Download this issue
Previous Next

Race and Residence from the Telescope to the Microscope

In a companion piece to 'The Waning of American Apartheid?,' Maria Krysan explores the underlying reasons why segregation is so stubborn. Read More

The BP Disaster as an Exxon Valdez Rerun

Whiles scenes from the 2010 BP oil spill may no longer linger on TV, past experience teaches that its environmental and human traumas have only just begun. This article explores the social dimensions of disaster and recovery. Read More

“What’s the Matter with Sociology?” This provocative question is posed as the title of a recent review essay in Slate by Sudhir Venkatesh, author of … Read More

Conley reflects on income inequality in the United States, and how our collective investment in the market likely ensures its perpetuation and growth. Read More

Rumors are shaped and spread within communities, affected by who we find credible and what we find plausible. This article explores the power and value of shared knowledge. Read More

Voices of the Darfur Genocide

Social scientific research is uniquely poised to document the patterned and probabilistic evidence helpful in achieving legal accountability for mass atrocities—and offers a voice to those who would not otherwise be heard. Read More

The Waning of American Apartheid?

Racial residential segregation has a long and persistent history in the United States. Data from the most recent decade give hope that housing patterns and racial attitudes are moving—albeit slowly—toward integration. Read More

Today’s tabloids, and their messages, are remarkably similar to the first glossies that appeared in Hollywood’s “Golden Age.” Even the first female film stars were caught between celebration and condemnation as they navigated traditional notions of femininity. Read More

Inside the Wisconsin Occupation

The successful, three-decade-long campaign to free the Soviet Jewry, found its strength in effectively blurring the boundaries among secular and religious acts, symbols, and space. Read More