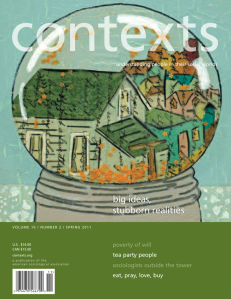 The harsh realities of poverty and bold ideals of “real utopias”. Also: a look at “embedded sociologists”, size discrimination, gender and science, and revisiting Sacco and Vanzetti.
Download this issue
Previous Next

What Gender Is Science?

Looking at science, technology, engineering, and mathematics (STEM) fields across countries challenges the assumption that women in more economically and culturally modern societies enjoy greater equality. Rather, freedom to choose a career may paradoxically cause women in affluent Western democracies to construct and replicate stereotypically gendered self-identities. Read More

Armed with methodological skills and a healthy sociological imagination, a quarter of advanced-degree holding sociologists find work outside of the ivory tower. Sociology, as a whole, can benefit from increasing support and dialog across the academic/applied divide. Read More

One thing I know is, if we’re going to significantly reduce poverty, we’ll have to fight for it. Liberals often discuss antipoverty strategies as … Read More

We were a little envious when friends in the publishing world recently quoted Men’s Health magazine’s spectacular circulation figures to us. And when we picked … Read More

Humorist Dylan Brody weaves together personal, social, and political commentary in his writing and performances. Here he discusses television and political humor, the state of heroes today, and the transformative nature of storytelling. Read More

Attributing poverty to individual failures cannot explain the mountainous gap between the rich and poor in this country. Instead, the author argues, Americans must realize that structural constraints cause there to be “winners” and “losers.” In the end, we all pay the price for poverty in the U.S. Read More

Sacco and Vanzetti and The Immigrant Threat

The anti-immigrant sentiment in America in the 1920s, exemplified by the case against Sacco and Vanzetti, provides a pertinent reminder of the power of nativism as an establishment faces threatening social changes. Read More

A “real utopia” isn’t an oxymoron or a figment of the imagination. Erik Olin Wright writes, instead, that real world examples of functioning social alternatives can help us find ways to improve the human condition. When history provides an opportunity to effect such changes, a familiarity with real utopias will provide a roadmap. Read More

Fat stigma and size discrimination are big issues in a culture that’s more and more overweight, but less and less tolerant of obesity. The authors consider how the legal system has regarded these discrimination claims and how they might evolve in the future. Read More

Informality and Visibility on the Periphery

In her time as a researcher in Abdijan, Jordanna Matlon explored the African city’s peripheral economies and the men who make their livings and identities in these spaces. Read More