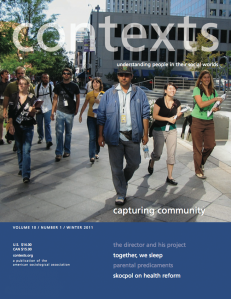 Putting America’s international power in historical context, building—and measuring—community in the Ozarks and nationwide, how sleeping is social, and a closer look at teen parents and low-wage women workers.

The Roots of American Decline

Using historical comparisons, the author analyzes America’s faltering international power and argues that it will take more than good will and high hopes to save the empire. Read More

People Like Health Reform When They Learn What It Does

Theda Skocpol explains the basics of the Affordable Care Act, arguing that Americans embrace the reform when they understand its core provisions. Read More

At the end of Voltaire’s great satire of the Enlightenment, his erstwhile “hero” Candide asks his profoundly naïve and misguided teacher, Pangloss, whether he still … Read More

No News Is Not Good News

In their respective books, Alex Jones and Jack Fuller examine what news is, how traditional journalism has been threatened, and how it can sustain its mission in the future. Lee Konstantinou’s novel brings these theories to life, painting a picture of the “mediasphere" in the not-so-distant future. Read More

Putting a face on teenage pregnancy helps us to look past stereotypes to understand the challenges of teen parenthood. Read More

Sleep on this: sleep is a highly social endeavor, posing a puzzle and a prism through which to view life in the wired era. Read More

Measuring Social Capital and Building Community in the Ozarks

U.S. Census Director Bob Groves sheds light on the scope, mechanics, and mission of his bureau and its most famous project. Also: working as a Census enumerator, Colby King learned firsthand the challenges and importance of accurate counting. Read More