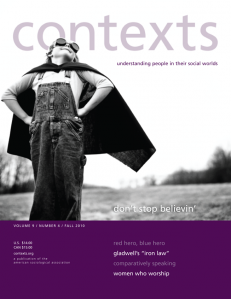 The Moslems Are Here—Be Afraid!

Christopher Caldwell’s Reflections on the Revolution in Europe: Immigration, Islam, and the West argues that Muslim immigrant resistance to assimilation poses a threat to European culture and politics. Reviewer Syed Ali criticizes this analysis as the book as over-simplified rhetoric lacking in counter-interpretations. Read More

A closer look at Malcolm Gladwell’s “iron law of Canadian Hockey” reveals that birthday cut-offs in pee-wee leagues do not, in fact, predict eventual hockey stardom. The authors find that the Gladwell’s supposed bias levels out once players reach the major leagues. Read More

Each issue, we bring you Discoveries: short, snappy overviews of recently published sociological research. Discoveries from our Fall 2010 issue are available online at … Read More

Working for the G-Man

Four social scientists discuss how they moved from academia into the public sphere. Outlining their new duties, they discuss the opportunity to bring sociological insight and social science research to Washington. Read More

A look at contributions of medical sociologists in the last half century reveals the importance of sociological thought for understanding key issues in today’s health discussions. Read More

Working together, geneticists and sociologists are showing that there is a dynamic, complex relationship between genes and social behavior. Read More

The Good, the Bad, and the Social

A sociology of morality helps make sense of our ever-shifting notions (and the social consequences) of right and wrong, bringing a cultural perspective to the study of human morality. Read More

Common conceptions of conservative religions in North America and Europe assume religion is “bad” for women. Even fundamentalist religions, criticized as patriarchal and oppressive, may open up spaces for women’s agency and provide empowering experiences for female members. Read More

The increasing use of wireless Internet access in public spaces has transformed the way that urban spaces are used and the types of interactions that take place there. Read More