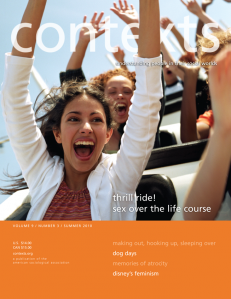 Sociologists on sex: teenage sleepovers, hooking up, and straight girls kissing. This issue also examines the sociology of animals, the work of Sebastiao Salgado, and a look at collective memory in South Africa.

Is Hooking Up Bad For Young Women?

Hookup culture is in the crossfire, but is casual college sex really so bad? As it turns out, women experience pleasures and pitfalls in both hookups and relationships. Read More

Great writing is indispensable for all of social science, but especially so for Contexts. This issue features examples like Evelyn Bush’s careful reading … Read More

Sexuality Has No Expiration Date

Contrary to popular conceptions, many people remain sexually active well into their golden years in spite of the decline of partner availability and overall health. Sexuality remains an important part of the lives of the elderly, though its expression may decrease or change over time. Read More

Memory, Materiality, and the Apartheid Past

The remaking of the Old Fort in Johannesburg, South Africa illustrates how heritage sites create a collective sense of history and how developing these sites is about more than just memory. Politics, economics, and the need for national healing all converge when it comes to preserving the past. Read More

Over the past century, people have come to view animals as the remedy to anything from autism to loneliness. Although evidence for such power is scant, how we relate to animals shows how we understand ourselves and how we think the world ought to be. Recent sociological research shows how animals represent our hopes, fears, and ideals. Read More

Sebastião Salgado, Behind the Lens

Through in-depth projects that explore social issues, Sebastiao Salgado’s photography parallels the field of sociology. As the winner of the American Sociological Association’s 2010 Award for Excellence in Reporting Social Issues, Salgado shares his thoughts on social analysis and photography. Read More

Every issue we provide a roundup of sociologists, and sociology, in the news. This issue we find sociologists speaking up about Americans’ love for God, … Read More

Sex, Love, and Autonomy in the Teenage Sleepover

Parents in the United States and the Netherlands take very different approaches to adolescent sexuality. While religion and economics play a role, a closer look at the two countries reveals different cultures of independence and control that shape attitudes toward teen sex. Implications are also discussed. Read More

Each issue, we bring you Discoveries: short, snappy overviews of recently published sociological research. Discoveries from our Summer 2010 issue are available online at … Read More