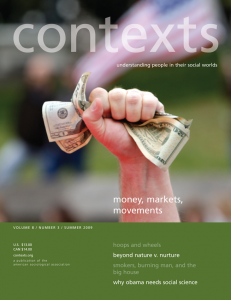 Sociologists explain economic crisis, disprove myths about taxes, and challenge assumptions about nature and nurture. Also, a discussion about the state of nonprofits, how our understanding of crime shapes the way we live, and a call for sociology to play a greater role in public policy.
Download this issue
Previous Next

One thing I know is that the American people deserve a government that draws upon the best social science available when developing social policy. Read More

Spam, Letters to the Editor and Gossip

Sociology and the Gene

A new generation of sociologists are using genetic data to advance sociological research, leaving behind age-old assumptions about the opposition of nature v. nurture. Geneticists have learned that the social environment often interacts with genetic factors and may even be able to alter genes Read More

In recent years, social scientists have devoted greater attention to empirical study of taxes&emdashhow they operate, what effects they have, how the public perceives them. As it turns out, a number of things citizens and policymakers think they know about taxation are wrong. This article exposes and explains some of those myths. Read More

Social scientists who want to do applied, visual research face two basic problems. One is that their work is applied, and the other is that … Read More

In Defense of Smokers

This commentary argues that smokers have been wrongly stigmatized and condemned in modern societies as the result of a too-cozy relationship among epidemiology, medicine, and public health policy. Castro-Santos argues that sociologists have a responsibility to recognize, analyze, and (perhaps even) disrupt the public attack on smoking and smokers. Read More

A Game You Can’t Win

New York-based photographer Mickey Smith is documenting the books, journals and other printed materials libraries are now eliminating as they reorganize themselves and their holdings electronically. Her project suggests that the digitalization of print resources may help disseminate information, and also changes how we experience knowledge, perhaps making university libraries themselves a thing of the past. Read More

To validate worth or confer esteem, people seek out what sociologists call authenticity—that sense of meaning and dignity, or a connection with other people and experiences. As the desert art event Burning Man enters its third decade, some hard-core “Burners” believe the event’s longevity, exponential population growth, and increasingly complex rules and regulations have eroded its authenticity. Others view change as a creative process crucial to the event’s rejuvenation. Read More

Sociologists interested in U.S. foreign policy, the politics of atrocity, and political culture have much to learn from studying artistic responses to Abu Ghraib. This art poses provocative challenges to the dominant framing of Abu Ghraib and highlights the importance of culture as a realm of political activism. Read More