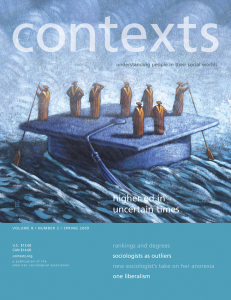 This issue we look at the value of a college degree, and the value of college rankings. Other highlights include features on discrimination, racial profiling and autism.
Download this issue
Previous Next

When a cheerleading catalog recently showed up in our mailbox, we snickered a bit before owning up to our similar role at Contexts. Like … Read More

Anonymous | What I Learned

An undergraduate writes about the social causes and consequences of eating disorders among girls and young women, including her personal struggle with anorexia nervosa. Read More

thinking twice about marriage Love may never go out of style, but the added benefits of healthy married life may be a thing of … Read More

The Myth of the Over-Scheduled Child

Conventional wisdom suggests the younger generation will suffer long-term social and psychological consequences from too much structured time. But a hard look at national data … Read More

Autism, Through a Social Lens

Photo Essay: Yes, We Have Some Bananas

St. Vincent and the Grenadines is one of the lesser known island nations in the Caribbean. However, it received international publicity when Disney chose, … Read More

The emancipation of slaves is a century-and-a-half in America’s past. Many would consider it ancient history. Even the 1964 Civil Rights Act and the … Read More

When the American public wants to understand social behavior, they turn to economists instead of sociologists. In order to regain their place in the public … Read More

Sociology Finds Discrimination in the Law

Correction: the print edition of this article contains a typo on page 31. The diversity management industry is an estimated $8 billion industry, not $8 … Read More

A Matter of Degrees

Americans value few things more than a college degree. But what exactly do they do for people? Although college graduates have higher incomes, the reasons … Read More