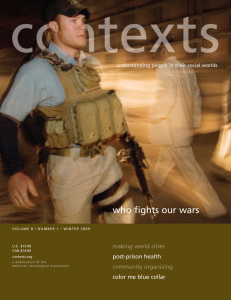 Letters. We get letters—or, actually, emails and voicemails and blog posts. Some can be a bit edgy, others are insightful and often amusing. Read More

Teaching to Blog, Blogging to Teach

In a recent episode of the Contexts Podcast, we discussed the relationship between teaching, research and blogging with ThickCulture founder, Jose Marichal. Read More

My parents adopted my brother Carl from Thailand six years before I was born. Read More

Family planning programs in sub-Saharan Africa haven’t succeeded in reducing population growth as elsewhere in the world. The authors argue this is because a central … Read More

The role prisons play in the spread of infectious disease among prisoners is well appreciated. But the health problems of prisoners extend far beyond prison … Read More

Most metropolitan growth is occurring in cities of the global south, where the populations are expected to double over the next three decades. It’s imagined … Read More

worries over a population implosion by deborah carr For many demographers, old fears of too many people in the world have been replaced by new … Read More