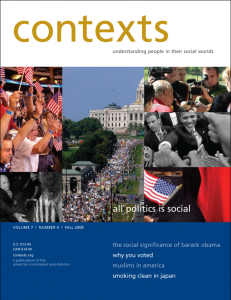 With another election year upon us, this issue features several articles on politics. Francesca Polletta writes about political storytelling, Andrew Perrin describes the two faces of voting, and a collection of esteemed sociologists discuss the significance of Barack Obama’s candidacy.

This issue also features Jen’nan Read investigating perception versus reality with regard to Muslim Americans, as well as up-close looks at exonerees, the “family values” of Hollywood and the role of gender in politics.

Slouching Out Of Whittier

The argument in Rick Perlstein’s Nixonland is more psychographic than tied to political economy or the stirrings of global markets. In other words, Perlstein is … Read More

Politicking in the Blogosphere

Blogs are now a central feature of modern social life, including political arenas. Particularly transformative have been the “netroots”—virtual networks of activists that proactively engage … Read More

Race and gender may have been the most visible currents in the 2008 presidential primaries, but what really unsettled the political waters was a riptide … Read More

Bring Out Your Dead

George Carlin should be the perfect comedian for sociologists. He was left- leaning, political, and not especially funny. In fact, his earnest concern for social … Read More

A (Sheltered) Island of Acceptance

Shelter Island is a resort town on the east end of Long Island, New York, adjacent to The Hamptons and part of a county (Suffolk) … Read More

The author spent a year in a mountain hideaway in the Roaring Fork Valley of Colorado observing and interviewing the locals. He found Aspen to … Read More

Since the 1960s, federal, state, and local government agencies have restricted where Americans can smoke. These rules emphasize the health hazards of smoking. In contrast, … Read More

The Social Significance of Barack Obama

With a candidacy that has provoked much deliberation over race relations, social movements, and the nature of political campaigns, prominent sociologists discuss the social significance … Read More

With 2008 being an election year, we weren’t surprised to receive a number of wonderful contributions on politics. Several of those were exceptional, and … Read More