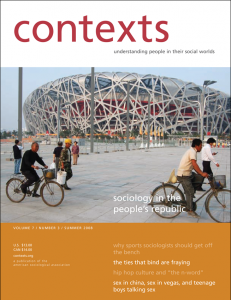 The Olympics head to China in the thick of controversy over the role of China in the world today. In this issue, we explore the emerging rights movement within China, the role of sociology in the People’s Republic, the cultural legacy of Mao and the next wave of global sexual revolution in China.

We also look at groundbreaking research that shows Americans’ networks of confidants is in decline, examine the use of America’s most taboo word by Latino rappers, and sports journalist Dave Zirin issues a call to arms for sociologists of sport.

Looking for a Way Home

Harry Potter and the Wise and Powerful Life Course Theorist

Part of the Harry Potter series’ sociological and lay appeal is that it is set in the familiar backdrop of life course development. The books … Read More

ross macmillan: Tales of the Heat At least three sociological accounts attempt to explain why such massive heat-related death took place in Chicago during the … Read More

It's Sexy. It's Big Business. And It's Not Just For Men.

Every January the AVN Adult Entertainment Expo transforms the Sands Convention Center in Las Vegas into what is arguably the world’s largest adult playground. The … Read More

Experts at the inaugural meting of the World Association of Chinese Sexologists envision China leading the next wave of a global sexual revolution. A description … Read More

China’s “one-child policy” is hailed as the world’s most effective overpopulation control policy. It has been so effective, in fact, Chinese population ofﬁcials now fear … Read More

The Movement and the Party

One thing I know is that political bents consist of two distinct elements—the movement and the party—and the relation between them. The movement consists … Read More