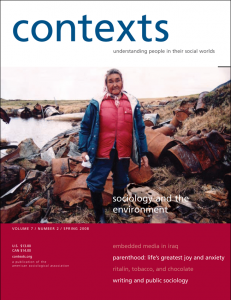 The strength of the U.S. environmental movement today is up for debate, and sociology continues to explore the relationship between the social and natural worlds, proving that social sciences can indeed help define environmental problems.

In this issue authors also explore the effect of the Pentagon’s embedded media program on coverage of the Iraq War, whether parenthood really does make you happier, and the first generation to attend college while using (and abusing) Ritalin.

Writing To Be Read

Sociology has long been notorious for its use of jargon and impenetrable prose. Sociologists writing badly inspired the editor of Fowler’s Modern English Usage to … Read More

Trespassing in Someone Else's Utopia

The Big Business of Haut Chocolat

Chocolate, in case you haven’t noticed, is big business. Visits to the 13th annual Salon du Chocolat in Paris and the 10th annual … Read More

There are very few films and virtually no television or literary characters that speak to sociology. And what is out there depicts sociologists as idealistic … Read More

The inequities of class, gender, and physical capacity gain their expression in moments of anxiety over how to eliminate one’s waste. This is one truth … Read More

A Sociologist Dreams of a New America

The non-profit Center for a New American Dream encourages Americans to consume more responsibly. Its mission is grounded in a sociological perspective that Juliet Schor … Read More

The Contexts vision is—as it has been since the beginning in 2001—to translate great sociology into an accessible format for both academic and public audiences. Read More