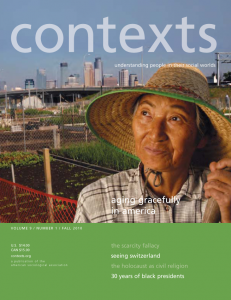 Contexts is an accessible, science-based sociology magazine. But there’s a huge difference between accessible sociology and fluff. As editors, our task is to simultaneously deepen … Read More

Essays From Inside: David Spencer

Sociology is about people. This is by far the most important discovery I made during my time in Inside-Out. Essays From Inside Other essays: … Read More

Contexts Magazine | What I Learned

The Inside-Out program brings college students and prison inmates together to learn. In essays, students from inside Oregon State Penitentiary share their reactions to studying side-by-side with students from Oregon State University. The results seem to be not just learning, but personal transformation on both sides of the bars. Read More

Essays From Inside: Doug Sanders

I have been fortunate enough to be part of the “Inside-Out Prison Exchange Program” for two classes. I was in the very first class offered … Read More

Essays From Inside: James Anderson

Prison is a cold and unforgiving place at times. It’s a 365 day per year punishment where the lack of meaningful programming to stimulate positive … Read More

Essays From Inside: Benjamin Hall

A New Perspective As hopeless as this sounds, at one point in my life I believed I would always lose and be destined to fail. Read More

One of the enduring questions following World War II is how so many ordinary German citizens could support or tolerate genocide. The books reviewed here shed light on how Germans have come to terms (or not) with this dark past. Read More

Margaret Mead and Buckminster Fuller are two examples of intellectuals who had influence beyond the ivory tower. Recent books chronicling each icon's career demonstrate diverse means to achieving influence and renown in the public realm. Read More

Millions of Americans have suffered since the credit bubble burst in 2008. Two books describe how the housing and credit card markets rose and fell over the past century: Alissa Katz's Our Lot and Charles R. Geisst's Collateral Damage: The Marketing of Consumer Debt to America. Their analyses reveal the hazards inherent in pursuing the American Dream. Read More

While poverty rates for older Americans have dropped overall since the advent of Social Security, elderly women of color are worse off than these numbers show. Lower lifetime earnings due to sporadic, part-time employment and discrimination in the labor market contribute to these disparities. Read More