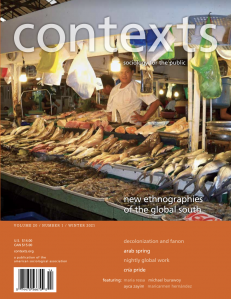 Our Winter 2021 issue is a special issue edited by Victoria Reyes and Marco Garrido, two outstanding early-career scholars who are transforming how we understand urban life and global politics. This issue on ethnographies of the Global South promises to reveal more cutting-edge research on issues critical to our work as sociologists.

Our goal in this issue is to highlight new ethnographies of the Global South. To be sure, sociologists have been writing about the Global South, and issues such as imperialism and colonialism, since the founding of the discipline. However, we believe that the proliferation of such work in recent decades marks a new and exciting development, one that augurs a movement beyond the historically domestic focus of American sociology. This work moves outside the shadow of U.S.-centric frameworks and beyond the need to bring findings back to the U.S. (as articulated in the oft-heard query “that’s interesting, but what does it mean for us?”—i.e., why should I care?). The new ethnographers of the Global South do not feel compelled to justify their fieldsites in terms of their relevance to the United States. They find these places theoretically interesting in their own right, and see in them an opportunity to rejuvenate traditional categories of sociological thought.

A Lennon Wall in a metro station. (Photo by Yao-Tai Li) In June 2019, millions poured onto the … Read More

The Meanings of Refugee Status

Hamid, 28 years old, was born and raised in a Palestinian refugee camp in Syria. He has a … Read More

Complexities of Menstruation in Kathmandu, Nepal

Photo by Erol Ahmed (Source: Unsplash). Thirteen-year-old me was excited to go to school! I had a new Mickey … Read More

Winter 2021 Letters from the Editors: New Ethnographies of the Global South

From the Contexts Editors: This past year has been a challenge in many ways. Still, it has been a pleasure … Read More