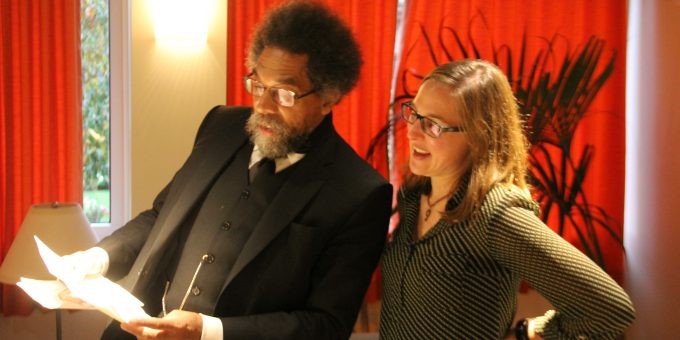 Activism and the Academy, An Interview with Cornel West

Cornel West wears many hats: He is a professor (currently Professor of the Practice of Public Philosophy at Harvard University), author (of 20 books), film actor (including The Matrix Reloaded), artist (three spoken word albums), and activist (more on this below). And this summer, we celebrate the 25th anniversary of West’s influential book Race Matters. Sociologist Janice McCabe sat down with West in Cambridge to talk about activism and the academy. Here are some highlights from their discussion, edited for length and clarity.

Janice McCabe [JM]: You went to Charlottesville, Virginia to protest the alt-right. How do you define the alt-right and why is it important to challenge them?

Cornel West [CW]: I don’t even accept the alt-right category. I really don’t. I think Neo Fascists are Neo Fascists. They come in different forms, different incarnations and iterations. But a lot of times, we have to be suspicious of the very categories because it becomes a way of downplaying the continuities of figures in the past. Yes, there’s going to be some discontinuities with those in the past, but there’s some continuities, too.

In the same way, if someone were to come to me and say, “I’m alt-left.” No, I’m not alt-left, I’m left. Now what is to be left? Well, left is suspicious of various kinds of hierarchies—imperial hierarchies, class, gender, trying to keep track of the vicious forms of transphobia and homophobia in the world as persons and as intellectuals. But it’s also trying to ensure to the best of one’s ability that one can empower, enable, and affirm the capacity of everyday people to rule themselves. It’s a radical democratic wager that we make on ordinary people to rule themselves, to have the equipment, the capacity to actually shape their own destinies as opposed to being victimized by imperial elites or corporate elites or patriarchal elites or homophobic elites or transphobic elites, you see.

It doesn’t make sense to me for somebody to have a radical sociological analysis with a neoliberal soulcraft. The neoliberal soulcraft is, “I want to be smart. I want to be rich. I want to have high-visibility. And I’m going to overlook the bombs that the American empire drops with drone strikes on Somalia or Afghanistan or Pakistan and so forth.” No, you [should] have a radically democratic soulcraft in which you’ll get a certain joy of telling the truth, joy of bearing witness, a certain zest in engaging in critique.

JM: What do you see as the role of colleges and universities in improving society?

CW: I think that, one, liberal institutions of learning are very fragile, they’re very precious, [but] they rarely, if ever, have been on the cutting edge of struggles for social justice, freedom for poor and oppressed people.

They’re fragile and they’re very precious because they’re trying to keep alive the best of the West. The best of the West is to engage in robust and uninhibited dialogue with a variety of different perspectives tied to a subject matter bigger than any of the interlocutors in the dialogue. It’s a love of truth, love of beauty, love of goodness. And even love of holy, under certain circumstances. And that’s very important to preserve. That’s one reason why I spend the time that I do with my dear brother Robby George of Princeton. We’ve taught many classes together on great books. Deeply conservative brother. I love and respect him as a person. We go at it on his positions in a variety of different ways, but we’re both fundamentally wedded to what Alfred North Whitehead would call the “adventure of ideas,” going back to Plato’s dialogues where you get this enactment of dramatic ways of engaging in dialogue and conversation that are contesting basic assumptions and presuppositions in the name of what Whitehead calls “noble discontent.” Critical discontent.

“We have a dialectical relationship with the academy: we support the dialogical energy, the Socratic energy, but we recognize it’s still an institution tied to big money, tied to elites…. It’s an institution of power, not just dialog.”

Now, that doesn’t go far enough, ‘cause that’s still within a liberal framework, but it’s a very important one. What goes further is the willingness to engage in some of the basic presuppositions of the university’s frameworks and paradigms, and that’s where leftists get in trouble. And sometimes even rightists get in trouble. We have a dialectical relationship with the academy: we support the dialogical energy, the Socratic energy, but we recognize it’s still an institution tied to big money, tied to the elites. And for the most part, most universities are really pressured when you besmirch their image or when you call into question their money-giving, which is to say it’s an institution of power, not just dialogue.

JM: I wonder what you think about the debates over kneeling versus standing for the national anthem? Was it at age nine that you refused to stand for the pledge of allegiance?

CW: It’s true. My great-great-uncle had been lynched with the flag wrapped around him in a military uniform coming back from World War I. That was the case for a number of black soldiers. When I heard that story in Texas, I had never been exposed to it, I had a very different perception of the flag. See, the flag is a symbol that’s polyvalent. It means a lot of things to a lot of different people, you know. People who stand up and salute the flag who’ve lost loved ones and so forth, that’s thoroughly intelligible to me. I understand that, and I would never call that into question. If they stand up and see what I see in the flag, then they’d probably sit down with me because the flag means different things. And we have to recognize it can mean different things.

My mother puts a flag out every July 4 because my father almost died in the Jim Crow Army and one of the reasons he was fighting under the flag was for dissent. When I spoke at West Point, I asked the brothers and sisters, “How many of you all are willing to give your life in order for me not to salute the flag?” A number of them stood up ‘cause that’s their understanding of the flag. It’s a symbol of a democratic experiment in which dissent is integral to that experiment remaining alive. I appreciated others, they said no. I think we have to be very cognizant of the fact that, one, you got political elites in the White House and others who have very narrow, chauvinistic conceptions of the flag. And you’ve got corporate owners in the NFL and so forth who are basically concerned about money and profit. And those are not two points of reference that facilitate serious conversation about what the flag means and the varieties of patriotism and the varieties of nationalism that we have to be able to keep track of.

And so, generally speaking, when brother Colin [Kaepernick] and brother Eric [Reid] and the others decided to kneel down, I said, “That reminds me of Rosa Parks just sitting down on the bus in order to stand up for justice.” They were concerned about their love for oppressed people and police brutality and police murder and police violence that’s arbitrary and too many instances against young Black and Brown youth (for more, see p. 66, this issue). So I tend not to be too doctrinaire when it comes to this flag issue. I just want to make sure whoever’s doing what they doing has love at the center of it. It could be love of family, love of justice, love of whatever. You hope that love has something to do [with it], but there’s going to be clashes. There’s going to be contestation when it comes to fights over patriotism.

JM: I think this opens up a lot of possibilities for having really important discussions about compassion and inequality, but for the most part the discussion has not gone there.

There’s a shift in subject matter: you’re not really concerned about these people getting shot down like dogs, you’re concerned about the fact that you have a right to protest. Well, no, no, no, don’t deodorize this discourse. We’re talking about something ugly, funky, messy. And it has to do with the repressive apparatus that’s out of control when it comes to the policing of folk in these hoods, especially poor Black and Brown people.

Janice McCabe is on the faculty at Dartmouth College. She is the author of Connecting in College: How Friendship Networks Matter for Academic and Social Success.

Janice McCabe is on the faculty at Dartmouth College. She is the author of Connecting in College: How Friendship Networks Matter for Academic and Social Success.