Jack Sprat could eat no fat.
His wife could eat no lean.
And so between them both, you see,
They licked the platter clean.

The Sprat family of nursery rhyme fame reflects the view that sometimes opposites attract. But the demographic norm is quite different: by most measurable characteristics, people marry those who are like them, not those who are different. 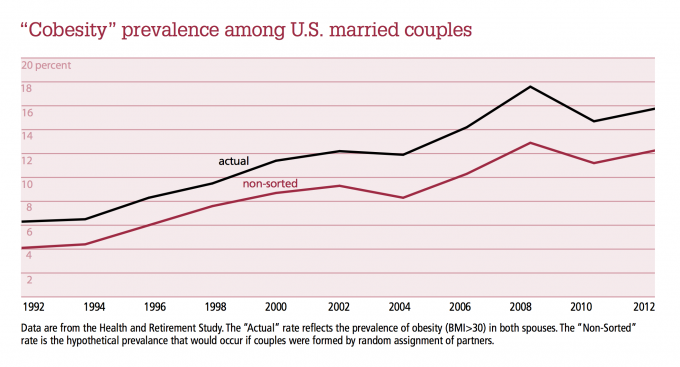 In the academic literature, the phenomenon of both spouses having obesity is called “spousal concordance in obesity.” I prefer the simpler nickname “cobesity.” As shown in the figure above, the prevalence of cobesity has risen significantly in recent decades. This poses new public health challenges.

Using nationally representative data from the Health and Retirement Study (HRS) in the United States, the graph shows the rising trend in cobesity prevalence among married, heterosexual couples in late mid-life. Since 1992, cobesity among couples where the husband is aged 55-59 has almost tripled, rising from just over 6% in 1992 to around 16% in 2012.

Increasing obesity is a major global public health concern. Cobesity adds an important dimension in that it exacerbates the problems associated with inequality (reflected in both health and socioeconomic status). Mrs. Sprat may get diabetes and heart disease, have increasing difficulty with mobility, and go on disability or take early retirement. If any of these happen, the hearty Mr. Sprat is there to pick up the slack. But in a cobese marriage, Mr. Sprat might face the same sorts of issues as his spouse.

Our popular culture is fascinated with the question of what brings two people together to form a long-term romantic relationship. However, we do not often think about our health in a way that is intimately connected to those relationships. Rising cobesity demands a more relationship-centered approach to public health.

The lower line on the graph, the “non-sorted” rate, indicates what the hypothetical prevalence of cobesity would be if men and women in the dataset were assigned spouses randomly. This line reflects the well-known rise in obesity over the past few decades. For married people in this age group, the trend in obesity prevalence has been similar for both men and women: from 21% to 38% for men and from 19% to 34% for women.

The difference between the two lines reflects the reality that couples do not form randomly. Instead, partnerships result from a “sorting” process that pushes people with similar characteristics together. Important social characteristics that people tend to share with their spouses include educational level, social class, religion, and ethnicity. This “positive assortative mating” or “homogamy” (the marriage of likes) is one of the strongest and longest-standing empirical regularities in sociology, with empirical research going back more than a century.

One might hypothesize that for these couples in middle age, the impact of sharing a life together would affect body weight in a variety of ways. Couples might share similar tendencies in diet and exercise, for instance. However, given that body weight is a function of complex processes over the complete lifespan, much about the relationship-related aspects of body weight remain poorly understood.

What happens to families when cobesity occurs, when both spouses are subject to the common consequences of chronic disease? Married couples traditionally vow to love and support their partner “in sickness and in health.” Most people probably imagine one partner supporting the other when illness strikes. But when both partners become ill, who provides support? Most cobese couples do not have serious health problems, but cobese couples still provide an illuminating window into health inequalities.

The health status of Baby Boomers reaching retirement age is a critical public health concern. Are these households positioned economically for approaching retirement and the costs of aging? The table below breaks out total household wealth (including housing equity) by obesity status of the couple. To smooth out the inherent noisiness of financial data, I combine all married couples in the data from 1998 to 2012 (couples appear more than once) where the husband is aged 55 to 64. This table represents American households on the cusp of retirement.

The differences in wealth across obesity status are stark. The median household wealth for couples with no obesity is nearly 250% higher than for those where both spouses are obese. If we concentrate on households with less than $50,000 in total assets, we find a similar story: 9.1% of non-obese couples fall below this threshold, compared to 18.3% of cobese couples.

We can also examine these disease estimates for cobese couples in a variety of ways. One noteworthy example is the case where both partners have disease. The co-occurrence of diabetes occurs in only 0.7% of couples with no obesity. It is more than 14 times as likely among cobese couples, occurring 9.9% of the time. Heart disease follows the same pattern, but is less pronounced: 1.3% of non-obese couples have a co-occurrence of reported heart disease, compared to 3.9% of cobese couples.

There is a vicious cycle that includes poverty and health. Low socioeconomic status (SES) leads to health problems, which, in turn, lead to lower SES because of reduced employment, lower wages, and higher medical costs. Marriage can sometimes provide a way to break this negative cycle, since a healthy spouse can provide resources to the household. When cobesity occurs, however, not only are two individuals at increased risk of poor health, but they also both have a partner who are in greater risk of health and economic problems. Cobesity magnifies the negative consequences of obesity relative to what they would be if the two obese individuals were paired with non-obese spouses.

Gender is also an important part of the health inequality story among married households. Female obesity is a particularly strong correlate of low SES, as can be seen in the table above on household wealth, especially the second column. What the numbers probably reflect is the long-term effect of sorting in the marriage market. Research has carefully demonstrated the truthfulness of the popular stereotype that men care more about a potential mate’s body weight (and physical appearance, generally) than do women. By the time they reach middle age, obese women are much less likely to be in economically advantageous marriages than thinner women. The same is true for men, but to a much smaller degree.

In other research with the HRS, I have shown that, when controlling for other factors, obesity lowers the probability of marriage for women in middle age even as it raises the probability of marriage for men. In sum, the marriage market can be an unforgiving place when it comes to physical appearance, especially for women. However, much more research is needed to fully understand the gender patterns related to body weight, SES, and marriage.

Marriage as a social institution is in flux. Family structures and the functions of marriage are rapidly changing. Marriage is becoming more diverse, as same-sex marriage has been legalized and interracial and interethnic marriage continue to increase. These trends may affect both the causes and consequences of cobesity.

Some scholars have argued that the tendency for marriages to form along socioeconomic lines has risen in past decades and that this has contributed to the rise in inequality. To some degree, differences in body weight in our society reflect differences in social class. Baby Boomers now enter retirement ages having married at later ages than earlier generations and having divorced at higher rates, too. Both of those trends likely cause stronger sorting among couples in middle and late ages. Thus, cobesity will surely persist and may even become stronger.

The ways in which cobesity will matter in the future depend critically upon what marriages mean to those involved and how those marriages function. For instance, an unseen but crucial aspect of inequality is the provision of informal health care within the family. The caregiving that family members, especially spouses, provide is key to promotion of good health. Lower fertility among Baby Boomers means that fewer adult children are available to provide care. Cobese couples are more likely to have health problems and less likely to have funds to purchase caregiving assistance. The socioeconomic and health impacts of the obesity epidemic have only just begun to materialize as succeeding generations of elderly are heavier and heavier. How will society bear the burden of all those extra pounds?

That question is far too complex to answer here. What is clear, though, is that neither medical practice nor public health are currently framing this challenge in terms of intimate relationships. Families play a role in causing obesity, and they will surely play an important role—for good or ill—in dealing with its consequences.

Sven E. Wilson is in the department of political science at Brigham Young University. He studies health economics and the sociodemographic determinants of chronic illness.

Sven E. Wilson is in the department of political science at Brigham Young University. He studies health economics and the sociodemographic determinants of chronic illness.