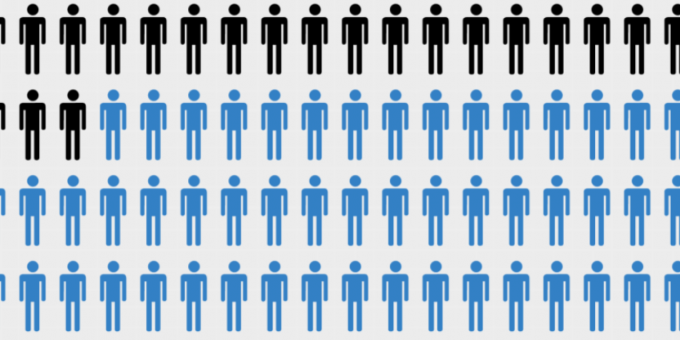 How many Americans do you think are gay or lesbian? Take a minute, think about it, and take your best guess.

Like most of us, you may have overestimated the population. “The American public estimates on average that 23% of Americans are gay or lesbian,” notes the Gallup polling organization. The table below shows the responses that Gallup received in 2011 and then in 2015 to the question, “Just your best guess, what % of Americans today would you say are gay or lesbian?”

Only 9% of Americans correctly estimate the size of the gay and lesbian population at somewhere under 5%. Why are we so far off? Part of the explanation comes from people’s misunderstanding of social statistics. We make similar mistakes when we estimate the size of racial and ethnic populations. Gallup remarks, “Americans estimate that a third of the U.S. population is black, and believe almost three in 10 are Hispanic, more than twice what the actual percentages were as measured by the census.” The better educated you are, the lower (and more realistic) your estimates. Thus, a lack of exposure to demographic data explains some of our tendency to overestimate.

But I want to think about this problem—the accuracy of our estimates—from a different angle. There are unique challenges associated with studying sexuality, and the one that concerns me right now has to do with “the closet”: How do we measure people who don’t want to be measured? Let’s start by defining what we mean by “the closet.” According to demographer Gary Gates, those in the closet include people “who are discordant with regard to recent behavior and identity, along with those who intentionally hide their LGB [lesbian, gay, and bisexual] identity.” This account creates two puzzles: How do we identify people who wish to conceal themselves? And how do we capture inconsistencies between sexual practices (who you sleep with) and identity (whether you think of yourself as LGB)? The 2008 General Social Survey included questions about respondents’ decision to disclose their sexual identity, attempting to address our first problem of invisibility. Analyses reveal that “0.3% of adults self-identify as LGB but indicate that they have never told anyone about their sexual orientation—even though they identified as LGB on the survey.” This group provides a direct way to measure the closet.

The second problem of discordance reminds us that sexual orientation is a “composite concept”: it consists of more than one dimension or component. What we learn will depend on what we ask. Specifically, our estimates about the size of the gay and lesbian population will vary depending on whether we ask about sexual attraction or arousal; sexual behavior and contact; or sexual identity. These three items are weakly correlated and poorly predictive. As psychologist Ritch Savin-Williams puts it, “Depending on which component is assessed, the prevalence rate of homosexuality in the general population ranges from 1 to 21%.” Asking about attraction returns the highest prevalence rates; the numbers are two or three times as high as what we get when we ask about same-sex behavior or self-identification as gay, lesbian, or bisexual. Savin-Williams concludes with a sobering assessment: “The majority of individuals attracted to their own sex or engaging in same-sex sexual behavior do not identify as homosexual.” Thus, not only do we overestimate the size of the gay and lesbian population, but we also exaggerate the number of people we think are closeted. This teaches us that identity is an unreliable measure of the closet.

Several journalists reported this finding. Writing for the Atlantic, Arit John asked in the title of his essay: “How many LGBT Americans are there? Depends on how you ask.” John summarized the findings of a special report that demographer Gary Gates co-authored with Frank Newport, the editor-in-chief of Gallup, in which they provided the inaugural results of a new question the polling company posed to 121,290 U.S. adults in 2012: “Do you personally identify as lesbian, gay, bisexual, or transgender?” John quoted Gates and Newport on how the question itself informs our thinking about the closet: “As a group still subject to social stigma, many of those who identify as lesbian, gay, bisexual, or transgender may not be forthcoming about this identity when asked about it in a survey. Therefore, it’s likely that some Americans in what is commonly referred to as ‘the closet’ would not be included in the estimates derived from the Gallup interviews.”There are unique challenges associated with studying sexuality, and the one that concerns me right now has to do with “the closet”: How do we measure people who don’t want to be measured?

One possible solution could be to measure the closet indirectly (rather than directly, as we did earlier) by comparing the responses people give about their sexual behavior with what they report about their sexual identity. Gates does the math: “If we consider those who have had any same-sex behavior since age eighteen and then add those who self-identify as gay, lesbian, and bisexual, we find that about 7.7% of adults either self-identify as gay, lesbian, or bisexual or report that they have had a same-sex sexual encounter.” Two-thirds (5.2%) of this group consists of people who report having had same-sex sexual contact yet still self-identify as heterosexual. “This could represent one estimate of the closet,” Gates says. When we narrow our definition of the LGB population to those who self-identify or have had a recent same-sex encounter, then the gap between behavior and identity shrinks. Only 1% of adults has had same-sex contact in the last five years but does not self-identify as LGB. Combined with the 0.3% of adults who intentionally hide their sexual orientation, this suggests that 1.3% of adults (representing 37% of the LGB population) are in the closet. If we include only sexual behavior in the past year and add those people who are consciously concealing who they are from others, then only 1% of adults are in the closet (or 30% of the LGB population). The lesson is simple yet stirring: how we define sexuality affects what we learn about it.

Gates’s strategy for how to measure the closet is clever but inconsistent with some of the newest research on heterosexuality. For instance, did you know that straight men often have sex with each other—without any challenge to their heterosexual identity? The practice of so-called “dude sex” can distort our understanding of the closet, as sociologist Jane Ward shows in her book Not Gay: Sex between Straight White Men. “When heterosexual men do engage in homosexual sex, and if they are not immediately presumed to be in the closet, these practices are treated as momentary aberrations.” For Ward, men who identify as heterosexual but have sex with other men are neither latently homosexual nor in the closet. Instead, she argues that homosexual contact is a “ubiquitous feature of the culture of straight White men”—and it has nothing to do with a gay or bisexual identity, nor does it tell us whether these men are easily dismissed as “closet cases.”

To remedy the misconception that men who have sex with other men are always gay, epidemiologists created the behavior-based category of MSM, which stands for “men who have sex with men,” more than two decades ago.  Their goal was to find better ways of counting “non-gay-identified MSM” without automatically assuming that these men are closeted. The MSM category decouples sexual behavior from sexual identity. Despite this clear advantage, the term never caught on beyond academic and medical circles. Labels like “heteroflexible,” “mostly straight,” “open,” and “bicurious” have become more popular instead. These neologisms expand the boundaries of heterosexuality by allowing for the possibility of same-sex contact within it—but they also reduce the size of the closet. In their 2016 study of 100 straight men, sexuality scholars Héctor Carrillo and Amanda Hoffman found that half their respondents said “the labels ‘straight’ and ‘heterosexual’ fully describe them.” Twenty-three adopted words that evoked some form of heteroflexibility, and 26 revealed that in private they sometimes called themselves bisexual—but they hastened to add that they would never openly adopt such an identity because they preferred to maintain “a public identity as straight.” Many of these men were “convinced that they are significantly different from strictly bisexual or gay men,” which is why we would blunder if we concluded that such men are really gay but just in the closet.To measure sexuality—and especially the closet—we need to open ourselves up to the vast possibilities of human sexual expressions.

The challenges associated with measuring sexuality are exacerbated by delicate questions of belonging. Who counts as a member of the lesbian, gay, and bisexual community? Are the boundaries firm and fixed, or can people fluidly move in and out of the group? What if you have sex with someone of the same sex just once—is that enough? (Some scholars call this idea “the one time rule of homosexuality” as an analog to the “one drop theory of race.”) What if you regularly have sex with people of the same sex but reject a gay or lesbian identity? There are no easy answers, I’m afraid. What I can do is to redirect us to a saying among sociologists: “If people believe something is real, it is real in its consequences.” Our peek inside the closet has shown us that things are never quite what they seem. To measure sexuality—and especially the closet—we need to break the binaries into which we slot one another and open ourselves up to the vast possibilities of human sexual expressions.

Amin Ghaziani is in the sociology department at the University of British Columbia. He is the author of Sex Cultures.

Amin Ghaziani is in the sociology department at the University of British Columbia. He is the author of Sex Cultures.