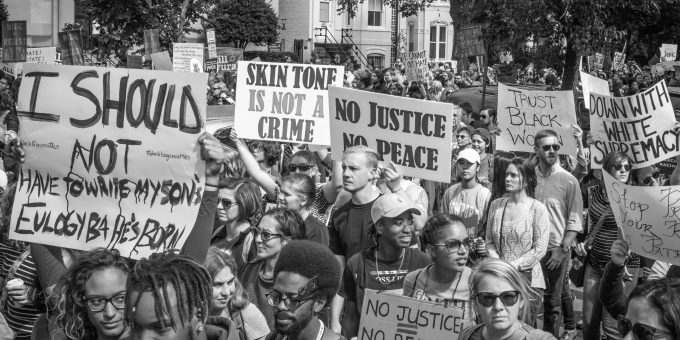 I didn’t go to the March for Racial Justice (M4RJ) on September 30 in Washington, D.C. as a reporter. I didn’t listen to the speeches, take notes, or even read the platform of the organizers—or that of the parallel event that day, the March for Black Women, which merged with M4RJ for a joint march and rally. (And I definitely didn’t follow the drama of the conflict between these organizations.) It was the same at the Women’s March, and the March for Science. In the shitshow that our American democracy has become, I go to these marches for the humanity of it.

In the sociology of social movements, there is a school of thought that says protests matter because, through the news media, they communicate to those in power what people care about, what the cost of opposing them might be, and that might get politicians or bureaucracies to change in response. That’s one thing. The other is that people at a protest might get to feel something in common with each other, get to see the same anger and fear and also happiness and even love with strangers as well as friends.

These are desperate times for a lot of people. The reality of Black Lives Matter is one of life and death at the hands of police. As we marched, the people of Puerto Rico were literally crying out for food and water, while the president was golfing and trading insults on Twitter. Nothing we did at the march was going to change that, honestly. What people got was some encouragement and support, some recognition that it’s hard. People got to yell “Black Women Matter!” at the top of their lungs and hear a crowd of people yell it back. Later on that probably means more people giving money to activist groups or political campaigns, more people volunteering or speaking up, but that happens indirectly through the emotions felt at the event.

Those of us who just show up for these marches are kind of getting to know each other, even if not as individuals. The chants and signs are looking familiar (“No Trump, No KKK, No Fascist USA!”). According to a survey by sociologists from the University of Maryland, three-quarters of the participants in the March for Racial Justice had been at the Women’s March in January, and a third had been at the March for Science in April.

For Whites, like me, there is a common language of allyship coming out in this diffuse movement. It’s Whites who hold signs that say “End White silence,” “Down with White supremacy,” “White privilege exists.” At this rally I also saw “Trust Black women” and “Privilege: When you think something isn’t a problem because it doesn’t affect you personally.” Black women were holding signs that said things like, “Black, empowered, and hella proud,” “I’m rooting for everybody Black,” and “Black is still beautiful.”

I didn’t set out to document the news of the march with these pictures. Instead I wanted to capture pieces of the emotion and preserve them. Of course people are angry, but in these pictures many look happy, too. If you’re going to be furious about inequality and injustice—or sad or worried or afraid—you’re going to feel that every day. At the march, at least you’re with other people who see you and recognize your feelings for what they are. It’s better to be angry together.

Philip N. Cohen is co-editor of Contexts. His is the author of the forthcoming book Enduring Bonds: Inequality, Marriage, Parenting, and Everything Else That Makes Families Great and Terrible.

Philip N. Cohen is co-editor of Contexts. His is the author of the forthcoming book Enduring Bonds: Inequality, Marriage, Parenting, and Everything Else That Makes Families Great and Terrible.