The Internet is a bastion of folk culture. Insider slang, chain emails, and trendy videos fill inboxes and news feeds, circulating from user to user. If someone uploads a photo of her cat, another adds a poorly-spelled caption and posts it to a message board, and months (or years) later, someone else changes the caption, this string of reappropriated words and images is called a “meme,” in Internet parlance. The term is vague enough to encompass such varied digital artifacts as Beyoncé’s “Single Ladies” music video, collections of funny yearbook quotes, and animated GIFs of a dancing hamster. Memes reveal much about what communications scholar Henry Jenkins refers to as the participatory culture of the Internet, which is constantly in flux.

According to Patrick Davison, “an Internet meme is a piece of culture, typically a joke, which gains influence through online transmission.” Limor Schifman defines them as “cultural information that passes along from person to person, yet gradually scales into a shared social phenomenon.” The availability of social media means that any piece of Internet content has the potential for an enormous audience. Websites like Know Your Meme chronicle popular Internet trends almost as quickly as they emerge.

The term “meme” was coined by evolutionary biologist (and famed atheist) Richard Dawkins in his 1976 bestseller The Selfish Gene. Though the book is mainly concerned with the propagation of genetic material, Dawkins briefly turned his attention to the propagation of cultural material. He observed that fashion and customs evolve rapidly, resembling the ways genes evolve. Curious as to how such influential norms could change so quickly, Dawkins broke cultural products down into units called memes, including “tunes, ideas, catch-phrases, clothes fashions, ways of making pots or of building arches.” Just as genes propagate themselves by leaping from body to body, he wrote, so “memes propagate themselves in the meme pool by leaping from brain to brain via a process which, in the broad sense, can be called imitation.”

Dawkins identified three key elements of a successful genetic variant: copy-fidelity, fecundity, and longevity. In relation to memes, copy-fidelity is the ability to replicate accurately; fecundity is its speed of replication; and longevity its stability over time. Certain memes, he said, will be more successful than others because they fulfill a cultural need or are uniquely suited to a specific circumstance.

Dawkin’s theory laid dormant until it was popularized in the late 1990s with the advent of memetics. Memes were a fitting metaphor for Internet culture, affording exact copies of digital artifacts, rapid person-to-person spread, and enormous storage capacity—a perfect storm of copy-fidelity, fecundity, and longevity. Marketers, theorists, and pundits seized upon the term as a description for Internet trends that made an average person like the “Tron Guy” or “Numa Numa Kid” an overnight sensation.

Memetics is a contested field. Many anthropologists and sociologists see memetics as limited in its capacity to understand how cultural artifacts are rooted in complex sociohistorical contexts. They charge that memetics sees “culture” as a series of discrete individual units, and that it blurs the lines between metaphor and biology. Dawkins wrote in 1976, “When you plant a fertile meme in my mind you literally parasitize my brain, turning it into a vehicle for the meme’s propagation in just the way that a virus may parasitize the genetic mechanism of a host cell.” While he emphasized that memes were only a metaphor, the idea that cultural diffusion has a biological basis was popularized with the rise of the terms “computer virus” and “viral marketing.” Seth Godin’s 2001 book Unleashing the Ideavirus argued that marketers and corporations could use the power of the Internet to create “ideaviruses” that spread from person-to-person without any push from the creator—“word of mouth marketing.” Thus, going beyond Dawkins’ original notion, memetics became a way for business people to describe new forms of marketing, particularly those tied to the Internet. 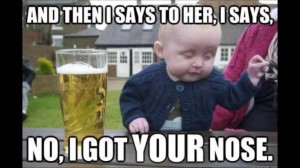 Contemporary memes can be roughly divided into two groups. A study of YouTube memes by Shifman distinguishes between “viral videos” (for instance, the video for Korean pop star Psy’s “Gangnam Style,” which was a huge hit in his home country and became a world-wide phenomenon on the Internet) and “memetic videos,” which spur “extensive creative user engagement in the form of parody, pastiche, mash-ups or other derivative work.” Davison calls the former “big like McDonald’s” (something enjoyed by many, but not co-created) vs. “big like Emoji” the popular pictographic language built into iPhones and used in new
and creative ways by text-aficionados. In other words, while some memes are just trendy pictures or videos that get passed around verbatim, others encourage a type of iteration, imitation, parody, and satire that can spawn literally thousands of variants. Memes, then, can become raw material for creativity. Think of the myriad “image macros” that let anyone slap a funny caption on the same image, or people uploading YouTube videos of themselves enacting the latest dance craze (the Harlem Shake, twerking, or even elaborate, choreographed wedding dances).

Memes harness what are really the “key logics,” as Shifman puts it, of online culture: sociability, replicability, and participation. They spread, according to Claudia Leigh, via a social, affective bond, and circulate through everyday communication channels like Facebook or Gchat. Memes harness the participatory potential of the Internet and typify modern popular culture.

Studying Internet chain letters, dance crazes, catchphrases, and slideshows of cute dogs may seem trivial, much as studying television or pop music did a generation ago. But media scholars believe memes typify the shift from a culture of consumption to one of production. While teenagers might once have spent their free time watching television, a young person today may get creative, using their laptop and Wi-Fi to overlay witty text on a photo of a cat. Though it’s not exactly intense intellectual labor, media scholar Clay Shirky is clear: even lolcats constitute creative work. Memes are the closest thing to a native cultural form the Internet has, and, as such, they demonstrate the sprawling variety of the medium.

Alice Marwick is in the communication and media studies department at Fordham University. She is the author of Status Update: Celebrity, Publicity and Brand- ing in the Social Media Age.

Alice Marwick is in the communication and media studies department at Fordham University. She is the author of Status Update: Celebrity, Publicity and Brand- ing in the Social Media Age.