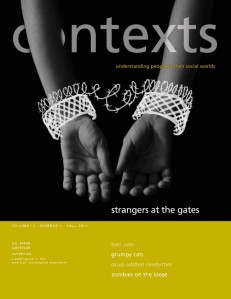 This issue covers gated communities in Puerto Rico, Golden Gate suicides in San Francisco, and affirmative action as a gateway to admission in higher education. Also: competition in girl’s soccer, media coverage of Whitney Houston and Lance Armstrong, and the links between HIV and gender violence in South Africa.
Download this issue
Previous Next

When asked about using banned substances to maintain his winning record, champion cyclist Lance Armstrong said it was “part of the job”—like having “air in … Read More

Media coverage reflects the conflicted status of drugs in a culture that both valorizes and demonizes their use. Sociologist Rebecca Tiger compares New York Times' coverage of Whitney Houston’s death and cyclist Lance Armstrong’s “performance enhancing drugs” scandal. Her analysis reveals the particular roles that race and gender play in how elite media and their readers negotiate and construct the morality tale of drug use. Read More

The Golden Gate Bridge continues to be the top suicide site in the world. John Bateson argues that a barrier will save lives, end the tragedies, and not detract from the bridge’s beauty or the view--but it remains far off. Read More

Table For One, Please

Kimberly HoltzWhile meals give us a chance to bond with friends and family, a growing number of studies find … Read More

The Cultural Life Of The Living Dead

Visual sociologist Helen M. Stummer revisits her early work on E. 6th Street and highlights her portraits of an interracial family she became close to in this photo essay. Read More

Scholars Sean Kelly and Laura Northrop discuss recent changes in perceptions of school quality. They find that Americans are not positive about the overall quality of elementary and secondary schools in the United States, while beliefs about school-to-school differences in quality are often exaggerated. Read More