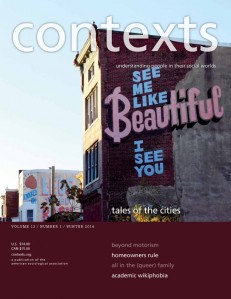 This issue examines the promise and possibilities of cities: from Philadelphia’s Seventh Ward to the suburbs of Chicago, we explore race, transportation policy, homeownership, and gentrification. Also: viewpoints on human trafficking, an interview with Budapest’s sociologist mayor, and some help with the jargon of labeling gender and sexuality.
Download this issue
Previous Next

Public contention over recent changes in New York City's streetscape, allocating more space and priority to pedestrians and cyclists, illuminates an underlying conflict between a belief system regarding motor vehicles as central to American life—the windshield-perspective assumptions here termed Motorism—and dissenting beliefs questioning the rationality of automotive monoculture. New York-based writer Bill Millard argues that during the twentieth century, Motorism attained a level of dominance thorough enough to be unrecognized and unquestioned in most locales; though it encounters enough opposition to be visible as an ideology only in a few places (particularly New York), its ill effects on the environment, the economy, health, and other values are increasingly apparent, suggesting that the New York "streetfight" has social ramifications extending well beyond New York. Read More

Sociologist Katie L. Acosta explores the centrality of family in lesbian, bisexual and queer Latinas’ lives and the efforts they make to integrate their families of choice and origin into one supportive kin network. Read More

Survival of the Fastest?

Borrowing from Herbert Spencer’s phrase “survival of the fittest,” the documentary film Survival of the Fastest aired just before the 2012 Olympic Games. It recycles the outmoded notion that race is an extant biological category that determines physical and intellectual outcomes. Sociologist Matthew W. Hughey discusses how such archaic racist assumptions are repackaged in the media spectacle of contemporary sporting and the glossy veneer of documentary film. Read More

Sociologist Margaret K. Nelson explores how Hollywood has portrayed the use of assisted reproductive technologies. She argues that these new technologies have the potential to transform the nuclear family as we know it; however, popular films glorify romantic love and traditional family structures. Read More

Family scientist Kevin Roy reviews the books So Rich, So Poor and Ain't No Trust. The books examine the consequences of welfare reform policy for low-income families and the next steps in dealing with rising social inequality. Read More

The Problem With Fair Trade Coffee

Many people purchase fair trade certified products because they trust that doing so makes a difference in the lives of small producers around the world. Sociologists Nicki Lisa Cole and Keith Brown discuss how changes to certification policy have modified the meaning of fair trade in a way that has troubling implications for small coffee farmers. Read More

Rethinking Wikipedia For The Classroom

Sociologist Piotr Konieczny focuses on the issue of Wikipedia's reception in the world of academia: in the background of slowly growing acceptance of it as an educational tool, why is a significant portion of the researchers and instructors still uneasy with it? Read More

Sociologist Syed Ali provides an analytical, autobiographical essay on gentrification in one of the "hottest" neighborhoods in Brooklyn. Read More