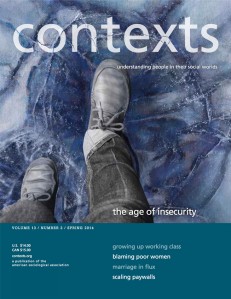 This issue examines taken-for-granted eternal truths that appear to be slipping away: that a college degree is a ticket to decent work, that working hard and being a loyal employee pays off, and that marriage marks one’s entry into adulthood. Also featured: Viewpoints on sexual assault policies, a closer look at “Open Access,” and an exploration of race and class inequality, Brazilian style.
Download this issue
Previous Next

Slipping and sliding—that’s how many Americans experience their lives today. And we’re not talking about the recent harsh winter. The seemingly eternal truths many of … Read More

Imitation may be the sincerest form of flattery—unless you’re a college student writing a course paper. Many colleges are trying to crack down on plagiarism … Read More

Corey FieldsThe current popularity of the trilogy Hunger Games may offer teens a model of female leadership, according to … Read More

Sam Grinberg“Picture this: your 7-year-old daughter comes home from school in tears. You ask her what’s wrong and she … Read More

In her 2013 book, Lean In: Women, Work, and the Will to Lead, Facebook’s Sheryl Sandberg encouraged women to scale the corporate ladder. Yet women … Read More

Corey FieldsGetting married may lead to weight gain—and not just because of that extra piece of wedding cake. Newlyweds’ … Read More

Americans like to tip, offering extra cash to everyone from service station attendants to home health care aides. But for some workers, like restaurant wait … Read More

The Terrorist Next Door

Media depictions of terrorists exaggerate the distance between “us” and “them.”Last August, when the cover of Rolling Stone pictured … Read More

RJL20“Little free libraries” are popping up in front of houses, apartments, parks and other public spaces across the country. Read More

Beyond Critics And Apologists

Professor Emeritus, Armand Mauss, talks with sociologist Jodi O'Brien about his experiences as a Mormon and a sociologist. Read More