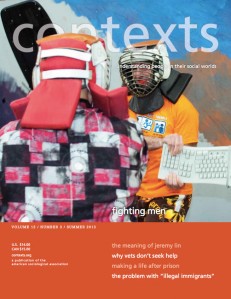 This issue explores suburban fight clubs, veterans struggling with mental health, and ex-offenders struggling to re-enter society. Also: viewpoints on charter schools, Linsanity, the rise of the “illegal alien” and marriage equality support among black gays and lesbians.
Download this issue
Previous Next

Masculinity in Many Forms

Weekend warriors in suburban basements, basketball stars who are also ethnic icons, ex-cons on the streets of New York—masculinity comes in many forms. While we … Read More

For now, “the love that dare not speak its name” won’t be silenced in Tennessee. Since 2008, Republican Senator Stacey Campfield has been trying to … Read More

When cyclist Lance Armstrong admitted to doping, he joined a growing list of professional athletes with ruined reputations. But public humiliation is not the end … Read More

by Cassandra ConlinAt a world economic summit in Cannes in 2011, Barack Obama walked into the room, shaking the … Read More

by Shirley CannonSince 2010, First Lady Michelle Obama has led the fight against childhood obesity. In “Let’s Move,” an … Read More

Although many public health experts consider obesity to be among the most serious health challenges in the U.S. and … Read More

When ethics violations occur in business, we often hear it is the result of “a few bad apples”—individuals like … Read More

Keeping it in the Family

For a while when people asked what I did for work, I’d mumble that I’d gone into the family business. Then I took to calling … Read More

Atlanta and Other Olympic Losers

Cities launch major campaigns to convince the International Olympic Committee to grace them with a staging of the Summer or Winter Games, and they spare no expense in readying their cities for the events. But will the promise of tourist riches and urban improvements pan out once the Olympic torch passes to the next host city? Read More