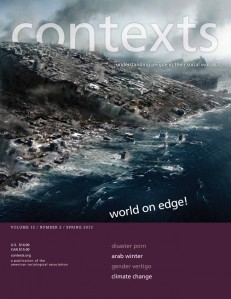 “War is not healthy for children and other living things” was a popular slogan of the anti-war movements of the 1960s. But new research shows … Read More

by Bridget BeorseWe love caramelized onions, but do we have the time to cook them? Slate writer Tom Scocca … Read More

The Poetry of Politics

Last year, Katha Pollitt, the longtime columnist at The Nation, received the American Sociological Association’s award for Excellence in the Reporting of Social Issues. One … Read More

How did queens rule come to rule reality television? Sociologist Joshua Gamson argues that the rise of segmented cable television, and of consumption-friendly subgenres, have invited style gurus, best-gay-friends, and queer worlds into the refracted spotlight. Read More

The research, interviews, images, and findings that are represented in juvenile-in-justice.com are the result of Richard Ross's continuing project that has lasted over six years, involved hundreds of institutions, and over 1,000 kids that are detained and confined. They are the voices of the youngest, least heard, from families with the least resources from neighborhoods with the least power.  Read More

The phrase immigration reform has been around since the early history of the country, and its meaning varies according to different social perspectives of whether to admit more immigrants or limit their numbers. Sociologist Nestor Rodríguez argues that while immigration reform may open the door for some new immigrants, invariably it keeps other immigrants out, sometimes because of restrictive regulations adopted by the administering government agencies. Read More

Longitudinal data suggests that the single adult homeless population is going through a demographic transition, where the overall population is aging but there are indications that a younger cohort may be emerging. Scholars Dennis P. Culhane, Stephen Metraux, Thomas Byrne, Magdi Stino, and Jay Bainbridge argue that interventions at both ends of this transition: housing the aging and increasingly infirm elements of this population while diverting at-risk younger populations from homelessness, have the potential to make a lasting reduction in this population. Read More

Sociologist Pamela J. Smock reviews two recent monographs on the topic of singlehood. One, Going Solo, is authored by sociologist Eric Klinenberg and the other, Single: Arguments for the Uncoupled, is authored by English professor Michael Cobb. Read More