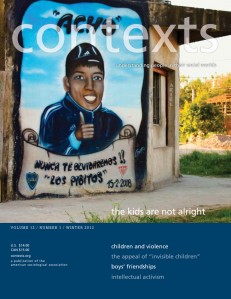 This issue covers violence in everyday Buenos Aires, movements to end deadly war in Central Africa, and young men’s masculinity in affluent societies. Also, an interview with a founding father of the Occupy movement and an analysis of public mourning practices from Steve Jobs to Kim Jong Il.
Download this issue
Previous Next

The Kids Are Not Alright

The kids, it turns out, are not alright. In our cover article, Born Amid Bullets, Javier Auyero takes us to a barrio outside of … Read More

The storm known as Sandy was called a “superstorm,” a “Frankenstorm,” “the perfect storm.” It was indeed impressive, with a wind span of about 1,000 … Read More

While the economy is showing signs of slow recovery, foreclosures continue to decimate American cities. Six million families have already lost their homes, and the … Read More

Rage Against The Refs

by Amanda LanzoneWhen people watch football, they tend to focus on their favorite team. But this season the NFL … Read More

In this interview, Kalle Lasn, founder and editor-in-chief of Adbusters magazine, discusses his magazine and the future of the Occupy movement. Read More

Beyond The One-Size-Fits-All College Degree

A "list" of what six social scientists are watching on television and film. Read More