What We Did With the Data

From the results, we computed the predicted percent of women who had an orgasm with a partner for those who had and had not ever masturbated to orgasm, while setting the distribution of control variables to the whole sample distribution in either case.

The graphs below are the same in their variables controlled and their key independent variable of whether the woman has ever masturbated to orgasm. However, they differ in the sample used and on whether the yes/no orgasm variable is a “have you ever” question, or a question about a specific event. The sample for our first graph below is all women who have everhad a male partner with whom they did at least one of the following things: had intercourse, had their genitals stimulated by their partner’s hand, or received oral sex. The dependent variable is whether they have ever had an orgasm with a man. The graph shows that, after regression-adjustment for controls, 86% of women who have ever masturbated to orgasm have had an orgasm with a man, while only 65% of those who have never masturbated to orgasm have had an orgasm with a man. (This difference and all the differences in the graphs below are statistically significant.) 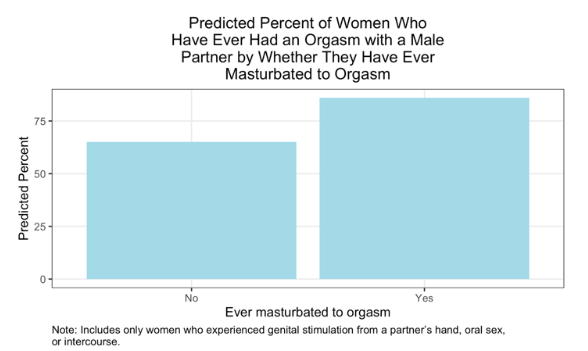 What about a woman having an orgasm with a woman partner? Is this too affected by whether she has had experience masturbating to orgasm? To find out, we did an analogous analysis for just the subpopulation of women who have ever had a woman partner from whom they received hand stimulation of genitals or oral sex. (This group overlaps with the group who have had male partners since some women have had both men and women as partners.) We used the same controls to regression-adjust the percents that we discussed above. The graph below shows that, among women who have had a female partner (as defined above), the percent who have had an orgasm with a woman is much higher among those who have masturbated to orgasm—59% compared to 43%. 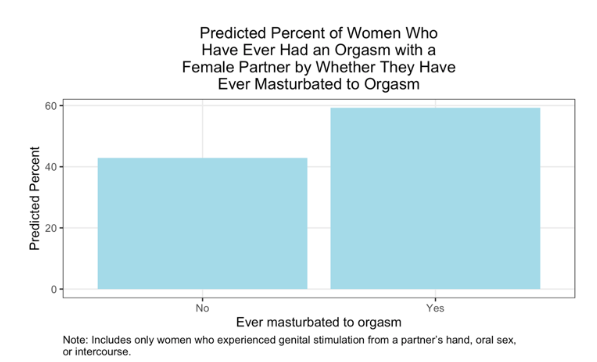 Sexual activity can happen in various contexts, and one context of special interest is the hookup, common among college students. Past researchhas shown a much larger orgasm gap between men and women in a hookup than in relational (i.e. girlfriend-boyfriend) sex. Thus, we were especially interested in whether past masturbation to orgasm would increase women’s experience of orgasm in hookups with men. Some of the events students called hookups entail no more than kissing and some nongenital touching, and this is unlikely to be enough to make most people orgasm. Thus, we included in the analysis only women whose most recent hookup with a man entailed at least one of the following: intercourse, receiving oral sex, or receiving hand-genital stimulation from the hookup partner. The graph below shows that the adjusted percentage of women who had an orgasm in their last hookup was a dismal 22% among those who had never masturbated to orgasm, but almost twice as high, 40%, for those who had ever done so. 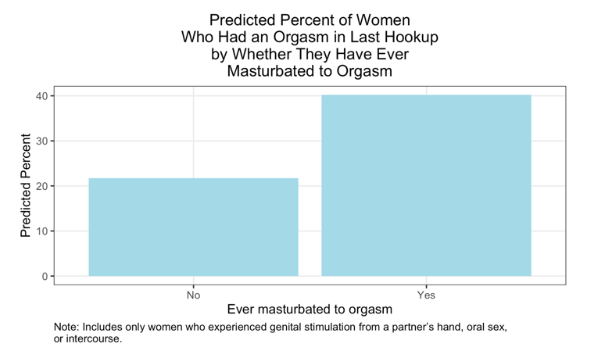 What Do Our Findings Mean?

Parents, schools, policymakers, and the public are often focused on the dangers of sex, such as STIs and unintended pregnancies. These dangers are real, but we believe that an appropriate public health approach should also take seriously the goal of women’s sexual pleasure and explore its determinants.

Paula England is Silver Professor of Sociology, Sophie Saydah is an undergraduate major in Sociology, and Andrew Levine is a doctoral student in Sociology. All are at New York University.

ank you so much for this. I was into this issue and tired to tinker around to check if its possible but co https://tracktrace.one/usps/ uldnt get it done. Now that i have seen the way you did it, thanks guys
with
regards

u so m https://tracktrace.one/usps/ uch for this. I was into this issue and tired to tinker around to check if its possible but couldnt get it done. Now that i have seen the way you did it, thanks guys
with
regards

Dear author, thank you very much for this helpful information about the my homework help, which will be really helpful for me now!

I think that it is individual. It's just a simple expeerience that you may have.

You know that there are two varieties of cannabis: marijuana and hemp. Unlike the more well-known tetrahydrocannabinol component of marijuana, it is considered a first-category drug along with heroin and cocaine, and cannabidiol is a non-psychotropic component of cannabis that does not overshadow consciousness. Until today, I did not know that there was any difference between them! But thanks to this blog https://bestcbdvapes.net already found out! CBD interacts with many body systems - from combination with serotonin receptors responsible for “good mood” to stimulating the work of receptors that calm the nervous system. Scientists call this property "full body massage."

Dear Paula, much thanks for this supportive data about the my homework help , which will be extremely useful for me now!

It's a good idea