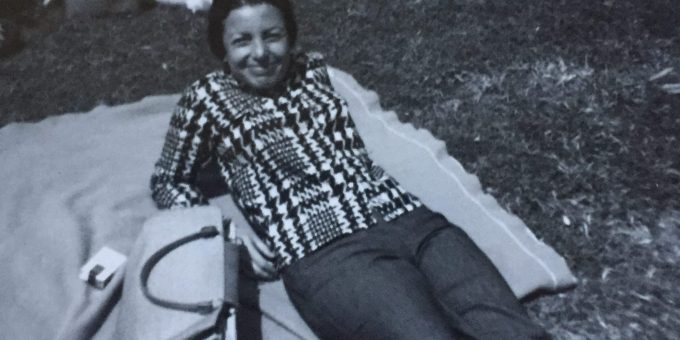 Racial Reckoning and White Empathy: Lessons from My Mother

When you spend a good deal of time with a person as they make their way from this world to the next, you are bound to hear some reckoning. Last year, as my poised, 80-year-old mother, dying of stage III cancer, sat with me in the remaining months of her life, she began to unfurl, unearth, and release. Don’t get me wrong—helping someone who is dying doesn’t always reveal an epic story. It’s actually a lot of silence—the whir of a fan, the background voices of television news, small meals not much eaten, fitful sleep, and maybe some back and forth about what matters in the face of death.

My mother had a kind of stoicism. She could even be slightly smug about her version of right and wrong. She enjoyed independence and believed in conformity, a balance I think made her patient with ignorance. She was born in 1936 in the Bronx to Jewish parents eager to leave the city. She played high school tennis in the largely racially segregated Florida of the 1950s. She graduated with a master’s degree in social work from the University of California–Berkeley in 1959, and, in the 1960s, she got her training on how to listen hard as a psychiatric social worker at UCLA, watching people’s journeys and struggles crawl painfully forward and back. She worked as a community organizer in 1970s Los Angeles. In my mother’s coming-of-age and the circumstances of her scholarships and striving, social change was not exactly cool, it was necessary. She was one of those who set about effecting social change quietly and because it needed to be done.

My upbringing was different. I grew up in the 1970s in a middle-class Los Angeles neighborhood called South Carthay. It bore some similarity to neighborhoods in other large U.S. cities tolerant of Black affluence. African-American fathers on my street were in professions from gynecologist to horn player, agent, insurance salesman, or civil service. There were other solidly Black neighborhoods to the south and west of us, but South Carthay was deeply integrated in ways none of us spoke about. We treated this integration gingerly, like the fragile social experiment it was.

One summer day, the kind that makes a forehead glisten and circles form under the short sleeves of fathers’ poly-blend dress shirts, my mother drove several of us neighborhood kids to the Safeway supermarket on Pico Boulevard for a carton of ice cream and a package of wafer cones. Our heads and hands stretched from the car windows in search of a breeze as we melted into place—no seat belts, of course—on the vinyl bench seats of my mother’s Pontiac Grand Le Mans station wagon. As she steered the car out of the market’s parking lot, we heard a siren, and my mother pulled over to the curb. A young, White, male officer surveyed us. My mother’s black hair was pinned up on the top of her head, her gray eyes squinted up at him. We kids couldn’t hear what he said, and I nearly forgot the moment. Yet, in her dying days, my mother remembered of the encounter: “He said basically, I was a welfare mother who didn’t seem too discriminating.” She remembered that he’d commented on her car and poor driving, too. She had said nothing.Proximal racism and the empathy and outrage they spur are important. Forty years before it could be hash-tagged, my mother wanted to see White people do the right thing.

My father, upon hearing this story, quipped, “I remember that.” But he didn’t—my mother never told him. My father had a history of working in corrections and on employment and community integration for those leaving prison. For his own reasons, he, like other fathers in our neighborhood, owned a gun locked at home in a file cabinet. He also took to anger easily, and my mother prized reserve. She didn’t tell him. She didn’t tell my Black friends’ parents, either, concerned they wouldn’t entrust their children with her again. She felt anger and a deep current of shame. That current would, over decades, wear an inexplicably deep fissure. In that fissure was this sharp-edged rock of an experience that my mother turned over in her gut until it was polished and smooth.

It takes a lot to bring an incident to one’s deathbed. I’ve wondered at my mother’s ability to hold on to it, why she held onto it. My mother experienced a sliver of racism that White people, for obvious reasons, normally don’t (except when they are proximate to or aligned with people of color). But her alignment was not a confessional one, it was ideational. Just as she never conveyed the story to her Black friends and neighbors, they rarely troubled her with their numerous stories of racism’s indignities. My mother grew up with separate drinking fountains—racism wasn’t foreign to her—but witnessing and experiencing racism are not the same. Being proximate to Blackness, she experienced racism (and sexism), and it rocked her world.

My mother would organize against White flight in the Los Angeles school district through the 1980s. That campaign’s failure and its legacy pained her for decades, too. She had memorable solidarity with a multiracial group of mothers who organized around equality initiatives through school PTAs. Calling themselves “The Fridays,” these women obviously talked about serious things—we kids were often shooed out of the breakfast rooms where they shared something of their lives and their ideas—and my mother would credit the group with teaching her how racism had affected her friends’ children the expectations educators had of them, why middle-class Black families so often left public education to ensure their children a fair chance. My mother’s small brush with the racist caprices of law enforcement changed what she was capable of seeing. It remade her politics for a lifetime.

Shortly after my mother’s cancer diagnosis, Trump won the presidential election spouting some of the most outspoken racism she had heard publicly stated in her lifetime. She looked at me and said, “I’m officially ready to go now.”

As a child in Florida and an adult in California, my mother had her heart broken by other White people, and she didn’t resist the cynicism that grew in her as a consequence. Trump’s victory made her doubt the credo of her generation, that slowly, linearly, society will bend toward justice and an evolutionarily expansive good will.

It is very much the belief of White people who want to further the legacy of civil rights (in this and prior eras) that other Whites are the primary obstacles to positive change. “They want to maintain their power, are not moved by the pain of others, don’t want to be named as ‘White people’.” It is reasonable to believe that, if more White people experienced proximate racism and its toxicity, they might not be so insensitive to the modest assertion that Black Lives Matter. What if it takes more than witnessing racism to break an allegiance with White supremacy? We can’t socially engineer so much misfortune, much as Whites might stand to benefit from those painful lessons.

My mother didn’t live to see the Starbucks video, in which a short clip taken by a White woman bystander reveals Black men escorted out of a Philadelphia coffee shop for no apparent reason other than their Blackness, but I wonder if this video and others—from “BBQ Becky” to “Permit Patty”—might signal a new, more accessible form of White anti-racism. Seeing and hearing White people challenge the police shows that we don’t need to experience direct racism to oppose it. Proximal racism and the empathy and outrage they spur are important. Forty years before it could be hash-tagged, my mother wanted to see White people do the right thing.

Judith Taylor is in the department of sociology and the Women and Gender Studies Institute at the University of Toronto. She studies identity politics, neighborhood organizing, and women’s movements.

What if it takes more than witnessing racism to break an allegiance with White supremacy? Visit clicker heroes 2.0

The author's mother was a noble soul and a good foot soldier who tried to do what was right. I, as an African American, sometimes wonder if White people carry with them, mentally and emotionally, the results of the wrongful deeds they have done to others? Are they ever bothered about they may have inflicted upon others as it appears some politicians are able to do? Do they believe there will be a day of reckoning for their actions? Or, are they able to block such thoughts from their memories until they are on their deathbeds? The article brings to mind Thomas Jefferson's quote "I tremble for my country when I reflect that God is just; that his justice cannot sleep forever. "

This is a serious problem. I think it’s worth talking about it to overcome it and eradicate it. Therefore, in my essay, https://studyhippo.com/exp-3b-nitration-of-methyl-benzoate/ I write and talk about it. I hope you support me too.

I want to thank you for the effort you made in writing this article. Your creative writing ability has inspired me to start my own blog right now.
vex 3

what a lesson you learn from your mom. i like it

https://mybestheadphone.com/best-affordable-wireless-gaming-headset/ ,see my refernce for more