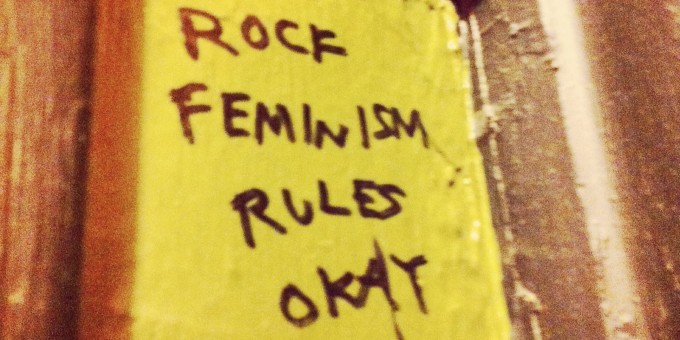 “Because we know that life is much more than physical survival and are patently aware that the punk rock ‘you can do anything’ idea is crucial to the coming angry grrrl rock revolution which seeks to save the psychic and cultural lives of girls and women everywhere, according to their own terms, not ours.” Thus reads one of the 16 or so tenets of the “Riot Grrrl Manifesto,” a powerful feminist document published in the second issue of the zine Bikini Kill. This quote serves as a microcosm of the Riot Grrrl movement, a political and feminist revolution beginning in the late 1980s in the Pacific Northwest. Although Riot Grrrl (RG) is generally associated with the early to mid-1990s, both the Fales Library Riot Grrrl Collection and Sara Marcus (in her book Girls to the Front: The True Story of the Riot Grrrl Revolution) record the movement starting in 1989.

Unfortunately for me, the birth of RG coincided with my entrance into first grade. While residents of Olympia, Washington, the movement’s hub, were attending feminist punk rock shows, and residents of Washington, DC, another RG epicentre were writing zines, I was watching Inspector Gadget and learning basic addition and subtraction. I’ve read that the groundwork for RG was laid in response to the shabby treatment of Anita Hill by the mass media; it’s also been reported that the Christian Coalition’s assail on abortion rights fomented collective radical feminist action. The name “Riot Grrrl” is frequently attributed to Jen Smith, an artist and musician. Riot Grrrl Collection, a book edited by Lisa Darms, reprinted an excerpt from the zine “Bikini Kill #2,” confirming Smith’s desire to start a zine called Girl Riot.

I first discovered RG in the early 2000s, several years after the pinnacle of the movement. My gateway into this vibrant feminist and cultural history was through the gloriously earthshattering and speakershattering music of Bikini Kill. Bikini Kill is one of many bands categorized as a product of Riot Grrrl. Other pivotal bands include Bratmobile, Huggy Bear, Excuse 17, Heavens to Betsy, Emily’s Sassy Lime, and Sleater-Kinney. It is integral to note that this is far from an exhaustive list; readers wishing to learn about additional bands are encouraged to read the books of Marcus and Darms. Rookie magazine published an excellent RG playlist a few years ago, and I also created one for you all:

I took a broad definition of RG with this playlist, as I included bands that formed prior to RG but which inspired the movement, such as L7, Lunachicks, and Mecca Normal. While I appreciate and listen to all of the bands on this list, Bikini Kill has accomplished for me what Yoko Ono elucidated in a song title called “Nobody Sees Me Like You Do.” This band, comprised of Kathleen Hanna, Kathi Wilcox, Tobi Vail, and Billy Karren, arrived on my scene when I needed their support most: as an 18-year-old yearning for strong, queer-positive, and feminist creators. Their album The C.D. Version of the First Two Records is one of my favorite records of all time, and I highly recommend it to anyone in need of a brave and empathetic feminist musical friend. In addition to music, zines were also integral to the movement, serving as a cooperative and accessible method of communication for Riot Grrrls across the country and world. They highlighted the do it yourself (DIY) ethos of RG, creating their own subcultures and media outlets to disseminate information relevant to their everyday experiences, which were not often given voice by mainstream cultural producers.

In 2009 I had the opportunity to work a dream job, as I helped Kathleen Hanna process her personal collection of RG artifacts prior to donation to NYU’s Fales Library. I’ve always been a fan of filing cabinets, but no other office storage container could hold a candle to a cabinet overflowing with zines, letters, and notebooks from one of my favorite historical epochs. As a librarian it brings me great joy that NYU has committed to archiving and preserving artifacts from RG culture, seeking to obtain materials not only from well-known bands, but from all who played a role in creating and growing this empowering movement.

Katelyn (Kate) Angell is an assistant professor reference and instruction librarian at Long Island University-Brooklyn. Her research interests include games based instruction, information literacy assessment, and the organization of information. Follow her on twitter: @kate_angell

You can write a amazing view and i am really impress to read your blog. everyone to need a mind freshener after a hard work, i am sure after playing this free games mahjongg connect you can feel exiting and make entertaining your free moment.

This article has given me the knowledge of some of the prominent things of Riot Grrrl movement along with this beautiful playlist. Now I have listened every song in that playlist for several times. Now one can check it out reviews about online writers before indulging into cooperation.