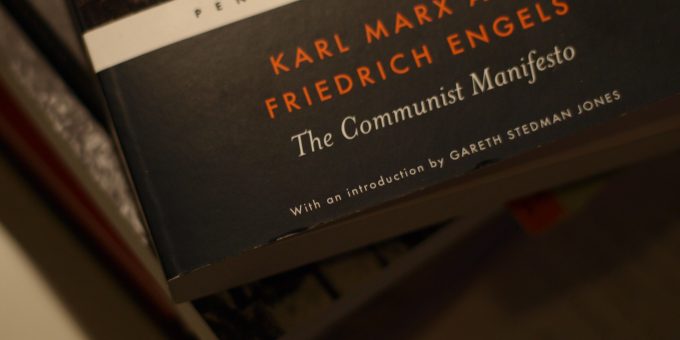 Marx’s writings are extensive and debate-worthy. That Marx wanted to influence real-world, political-economic change is obvious: while the front of his gravestone reads “Workers of All Lands Unite,” another side reinscribes his pragmatic vision: “The philosophers have only interpreted the world in various ways. The point, however, is to change it.”

For academics, Marx is particularly notable for the central focus he placed on social class, defined by one’s relationship to the means of production. Briefly, Marx split classes into two camps: the bourgeoisie and the proletariat. The bourgeoisie control the means of production, owning businesses, farms, fields, and mines, while the proletariat has nothing to sell but its own labor.

The Communist Manifesto, which Marx wrote with his comrade and financial benefactor Friedrich Engels, puts forth many direct, testable claims. Far from Marx’s only influential work, the Manifesto remains Marx’s most widely read work. Most believe it is also among the clearest presentations of Marx’s understanding of domestic and global dynamics. Because he primarily focused on Western Europe and the U.S. in this volume, let’s consider five of Marx’s Manifesto claims regarding these areas of the world.

There are two ways to grapple with this claim. First, there is the surface-level assertion that capitalist societies involve a binary between a business class and a working class, and that the two are in inevitable conflict as the conditions of the working class deteriorate over time.

In many ways, this claim is inaccurate. We can quickly recognize that the U.S. and Western Europe contain a range of professions that defy working- and business-class categorization, particularly those middle-class professions now requiring a four-year college degree or beyond. Life expectancy rates have risen substantially and individuals (especially in Western Europe) have more access to health care, education, and technology and consumer goods than ever before.

Considering the proposition with regard to relative inequality, however, lends credence. Some countries allow for far more possibilities for their upper than lower classes. This is particularly true in the U.S., where finances directly confer opportunities for education and quality health care, even as the Gini coefficient reveals that pre-tax levels of inequality in the U.S. are nearly identical to those in Western Europe. The difference is made up in the social policies of Western Europe, which effectively reduce post-tax levels of economic inequality, paving way for less social inequality. Thus, social mobility is far more likely in Western Europe than in the U.S.

Marx never presented a single, clear vision of a socialist society. Instead, he painted a picture in contrast to capitalism’s inequality, poverty, exploitation, and general misery. Within a socialist society, we would thus expect a radical redistribution of income and wealth, more power and enfranchisement of the working class, and public ownership and control of many important services and industries (education, transportation, and health care, among others).

Space constraints preclude a complete exhumation of social policies all across the world. Suffice to say, though, that since the turn of the 20th century, many countries have implemented social programs aimed at tackling social and economic inequalities. From public health care systems to public schooling initiatives, unemployment insurance, and social security programs, the U.S. lags behind its Western European counterparts in many areas. Even still, with social programs including Medicare and Medicaid, U.S. life expectancy (used here as a rough measure of quality of life) has risen across socioeconomic strata.

The conditions of the working class are supported, in Western Europe, through high levels of unionization. In contrast with the U.S., CEOs there receive lower compensation and employees receive higher and more varied benefits, including paid leave. Socialist, and even some communist, parties have occasionally thrived, even gaining executive power, while, across the ocean, the U.S. has begun to witness a surge of individuals expressing support for socialism, including politicians Bernie Sanders and Alexandria Ocasio-Cortez and the rising membership of the Democratic Socialists of America party.

All together, there is no doubt that history has edged toward more socialist-oriented policies. Neoliberal counter-movements rise and, at times, succeed, but the political terrain has invariably shifted since Marx’s heyday.

“The need of a constantly expanding market for its products chases the bourgeoisie over the entire surface of the globe. It must nestle everywhere, settle everywhere, establish connections everywhere.”

Marx was right about this. Countries increasingly produce for the global economy, and the world is more economically interconnected than ever. Corporations, with cross-national boards of directors, cross-border mergers, and cross-cultural imports, have shuffled their production processes and economic reach to every corner of the world. Imported products, from food to music to clothing, are ubiquitous in the U.S. and Western Europe.

In recent months, U.S. President Donald Trump has championed certain protectionist measures, but these have received extensive pushback, both domestically and internationally. Even if Trump continues to push back against globalism, the world will move on—some countries have already begun to reconstitute their supply chains and export routes.

Nowhere has this disorder been more evident than in the Great Recession. Without getting into all the messy details, this crisis primarily involved mortgage brokers and investment bankers bringing the global economy to the brink of destruction in 2008. In the U.S., they preyed on poor citizens by providing subprime mortgages, they bundled and sold these volatile loans to global investors, betting against these loans in newly created financial schemes and leveraging banks to the verge of collapse. The U.S. federal government had to intervene to bail out its banks and prevent financial collapse.

Ultimately, these voracious maneuvers had been designed to achieve wild, short-term profits, with no regard for the welfare of the community. It is precisely the sort of crisis Marx predicted, except now we have global crises threatening the global economic system.

“What the bourgeoisie produces, above all, are its own grave-diggers. Its fall and the victory of the proletariat are equally inevitable.”

Even as Marx’s focal countries have developed some socialist-oriented policies, full-blown “socialist revolutions” have actually transpired outside this high-income, industrialized world. Albania, China, Cuba, Laos, North Korea, Russia, Vietnam—these rural, low-income societies are quite the opposite of where Marx expected the “grave-diggers” to emerge.

For their part, many Western socialists have taken great pains to reveal the deficiencies of those now-shuttered “actually existing socialist” models and the few that remain, particularly that they lack democracy and often relied (and continue to rely) upon repression and state terror for their viability.

In the end, Marx remains relevant for many reasons. His vision of a more equitable future and his calls to action continue to inspire activists, and his claims provide theoretical direction to social scientists and other academics. Clearly, not all of his assertions have proved true, but they remain relevant after nearly two centuries: Marx’s work centralizes class to the detriment of other demographic factors (including race, gender, and sexuality), yet social class undeniably shapes life chances (especially in the U.S.) as it deeply intersects with these additional, demographic factors. Until these chances are seriously recalibrated, the long-dead Marx will be among the canon of modern social theorists.

Timothy M. Gill is an assistant professor of sociology at the University of North Carolina-Wilmington. His research specifically focuses on U.S. foreign policy towards Venezuela, and he teaches courses on political sociology, sociological theory, and globalization.

This article seems to conflate Communism with State Capitalism, also a lot of these points don't really deal with the heart of Marx's work. Where is the analysis of wage-labor, or worker control of the means of production (again conflated here with "public/state ownership")?

Marx has a lot of great and famous works, I like to connect his writing.
happy wheels

Just when I believed I couldn't ever want for more
This ever changing world pushes me through another door
I saw you smile
And my mind could not erase the beauty of your face
Just for awhile
Won't you let me shelter you?

How do we explain something that took us by surprise?
Promises in vain, love that is real but in disguise
What happens now?
Do we break another rule?
Let our lovers play the fool?
I don't know how
To stop feeling this way

Well I think that I've been true to everybody else but me
And the way I feel about you makes my heart long to be free
Every time I look into your eyes, I'm helplessly aware
That the someone I've been searching for is right there

Hold on to the nights...

Spider solitaire is such a wonderful online game, This is available in different versions, You will really enjoy it.

Hey guys there is an amazing game to arrange the card in an order called spider solitaire game , The game is very interesting just go to browser and enjoy the feature without download the game.

I want to thank you for the effort you made in writing this article. Your creative writing ability has inspired me to start my own blog right now.
mapquest directions

Hi, I really appreciate the effort you have put in this article. It is really good and informative. I have been taking help form mymathgenius.com website to write articles but I still can't write as good as this one.

Countries are increasingly producing for the world economy, and the world is becoming more economically interconnected than ever before. We wrote an essay on this topic, very interesting. Thank you for sharing such information!

I do really enjoy reading your article and I hope i can reach out to you as soon as possible :). Best regards