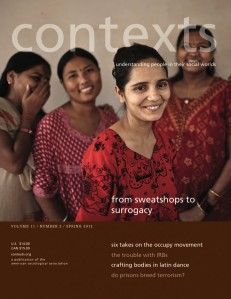 This issue explores surrogate mothers in India, bodily perfection in Latin dance, and the impact of IRBs on sexuality research. Spring 2012 also features viewpoints on Occupy Wall Street, challenges myths about islamic terrorism and prisons, and shows how two intellectuals have fundamentally changed altered how Americans see the nation.
Download this issue
Previous Next

The U.S. population continues to become more racially and ethnically diverse. In fact, most of the growth in population from … Read More

Class Struggle in the USA

The public believes that class conflict is rising. Two-thirds of Americans say there are strong conflicts between the rich and the poor in America, according … Read More

“When does a broken heart become a diagnosis?” asked the New York Times in a front-page article in January, reporting … Read More

by Gabriela Molina (gabrielamolina.com)If you’ve spent any time on Facebook, you have probably wondered if people really have as many … Read More

It Takes a Care Village

We all know that Americans are living longer. But some of us are living much, much longer. According to the latest Census, the number of … Read More

A Feminist’s Work is Never Done

An interview with Joan Acker, professor emeritus at the University of Oregon. Acker's work has been on the cutting edge of feminist scholarship for more than 35 years. Acker talks about such topics as her theoretical training, welfare reform, feminist sociology, and her informal campaign to end football. Read More

Why do working class women in India choose to become surrogate mothers? Sociologist Sharmila Rudrappa explains that these decisions make sense when contexualized within larger changes in the economy, the appallingly low wages these women command for their labor, and the lack of meaningful work.  Read More

U.S. Prisons and the Myth of Islamic Terrorism

There is a great deal of concern that U.S. prisons are generating high levels of Islamic extremism. Sociologist Bert Useem argues that the evidence fails to support this fear. Read More