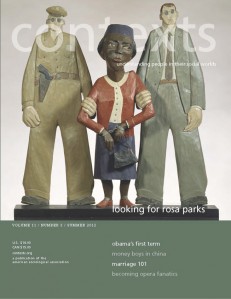 Michael Schudson on what we know about Rosa Parks, Michael Kimmel on the role of chance, accident, and luck in research, and Jean Beaman on the North African middle class in France. This issue also features Viewpoints on Obama’s first term and features on sex entrepreneurs in China, marriage promotion advocates, and opera fanatics.
Download this issue
Previous Next

Writing for Your Favorite Aunt

C. Wright Mills once said that anyone who writes in a widely intelligible way is liable to be condemned as a “mere literary“ critic or, … Read More

“I’ve been straight and I’ve been gay; gay is better…for me, it is a choice.” These comments made Sex and the City alum Cynthia Nixon … Read More

The Politics of Broken Dreams

An interview with Marcy Westerling, a leader in organizing rural communities in the Pacific Northwest. Westerling talks about such topics as her activism, the shifting winds of American populism, and living with a terminal illness. Read More

Six Tastes, by Adam FagenMost craft beer enthusiasts will tell you that the right beer can enhance your food, complement the seasons, and improve … Read More

Attack of the Pink Slime

From Private Pennies to Public Good

By MoneyBlogNewzBrother, can you spare $25? Nicholas Kristof did. In 2007, the New York Times columnist generated buzz when he wrote about his visits … Read More

By North CharlestonAs we get older, the passage of time seems to accelerate. Clinical social worker Linda A. Chernus, writing in Time & Society … Read More

Sex Entrepreneurs in the New China

Based on ethnographic research on the male sex industry in China since 2004, sociologist Travis S.K. Kong examines how male rural migrants become male sex workers (or “money boys”) and explains how to make sense of their lives within the context of China’s quest for urbanization, modernization, and globalization. Money boys have found opportunities opened up in new spaces by the development of the market economy, the burgeoning of the sex industry, and the emergence of the gay community in reform China; however, they are struggling in these new spaces of social exclusion, legal constraints, and cultural domination. Read More

Using life stories and observing opera fans in Buenos Aires, Argentina, Claudio E. Benzecry shows how passion for a cultural object develops, gets refined and sustained over time and the consequences this has for personal identity. In addition, Benzecry argues that his observations at the opera house serves as a template to understand other forms of fandom, cultural consumption and passionate behavior more generally. Read More

But Madame, We Are French Also

Based on participant observation and interviews in the Parisian metropolitan region, sociologist Jean Beaman discusses middle-class and upwardly-mobile children of North African immigrants in France, who despite their upward mobility feel just as marginalized as other children of immigrants. Read More