Class Struggle in the USA 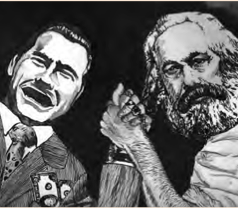 The public believes that class conflict is rising. Two-thirds of Americans say there are strong conflicts between the rich and the poor in America, according to a recent report by the Pew Research Center. The number is up 19 points since 2009. Perhaps society is, as Karl Marx claimed, “more and more splitting up into two great hostile camps, into two great classes directly facing each other.”

Journalist Thomas B. Edsall, in his new book, The Age of Austerity, argues that a zero-sum politics has taken hold as Democrats and Republicans scramble to maintain their share of what they see as a shrinking economic pie. Neither side, however, presents themselves as the “party of the rich” or the “party of the poor”; both claim to represent the middle class.

For many Americans, class is a moral identity. Americans tend to believe that the poor deserve their fate, and that the rich do not deserve their wealth. They superimpose the moral order of the lazy, the hardworking, and the greedy onto the poor, middle class, and rich.

As long as Americans sort their fellow citizens into moral categories, we’re unlikely to see class struggle in any Marxist sense. But that doesn’t mean we won’t hear the term “class war” used repeatedly from now until November.