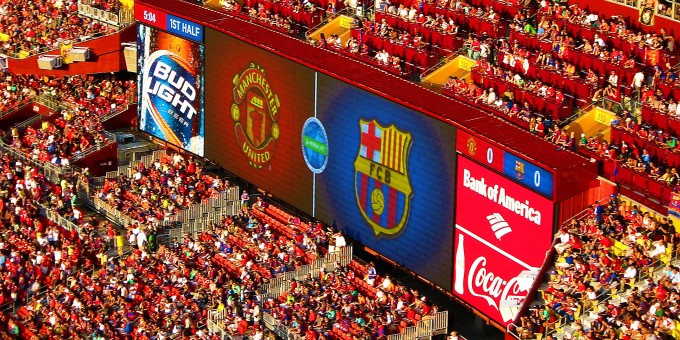 by James P. Curley and Oliver Roeder | March 17, 2016 | Winter 2016
The English Premier League recently signed an $8 billion contract with two cable channels, allowing them to broadcast games from 2016–2019. And this staggering sum is only for the domestic broadcasting rights. The league will generate another $5 billion over the same period from international TV deals. The EPL is carried by 80 broadcasters in 212 territories worldwide, and an average game is watched by over 12 million people. With these astonishing numbers, the EPL has every right to call itself the most popular league in the world. In comparison, its closest rival, Spain’s La Liga, draws an average of just over 2 million fans per game. That league’s top two teams, Real Madrid and Barcelona, negotiate their own TV contracts since they are able to get more money from the global TV audiences than selling La Liga as a whole. Other top European national leagues also languish in comparison to the English league. Italy’s Serie A draws 4.5 million viewers for an average game and Germany’s Bundesliga is roughly 2 million viewers.The English Premier League has every right to call itself the most popular football league in the world.

Why is the EPL so popular worldwide? A number of theories have been floated but after close examination, we find that most prove to be no more than flimsy folk wisdom.

One theory is the passion of the players, commonly thought to be much higher than that of other European leagues. It is often remarked by commentators and pundits that English fans demand a higher intensity and work rate from their team’s players. As the former Manchester United player, current England assistant coach and Sky TV commentator Gary Neville recently said, “When people talk about the DNA of English football, we’ve got one: we work hard, we’re organized, structured, resilient, hard to beat, that never-say-die spirit.”

English fans have come to expect a high tempo, blood-and-thunder style of soccer, compared to the slower more technical European style making the Premier League a quicker, more open, more physical and more attractive game for international viewers. Yet, the proportion of English players in the Premier League has been consistently falling from over 70% in the inaugural 1992-93 season to 36% in the 2014–15 season with many technically skilled foreign players now playing in England.

Another common refrain from English soccer personalities is that the English league’s popularity is due to its highly competitive nature. It’s often heard that the EPL is the only league where “bottom can beat top” and where upsets happen at a much higher frequency than in other top European leagues. For instance, the former Chelsea manager and agitator extraordinaire, José Mourinho recently compared the EPL to La Liga, the league where he managed Real Madrid:

These comments regarding the supposed higher competitive balance in English soccer often go unchallenged. But just how true is this narrative? One top British soccer writer, Jonathan Wilson, is not convinced:

It’s the most competitive league in the world. Anybody can beat anybody on their day. There are no easy games in this league. The mantra of the Premier League apologists is well known. …It’s nonsense, of course.

We sought to test these claims by examining results and final standings data from six top European soccer leagues from 1995–96 and 2013–14. The leagues are England’s EPL, Spain’s La Liga, Italy’s Serie A, Germany’s Bundesliga, France’s Ligue 1 and Holland’s Eredivisie.

When looking at the number of unique winners of these European leagues, it appears that no one team has dominated. For instance, in these 20 complete seasons, Bayern Munich and Manchester United have won their domestic leagues 12 and 11 times respectively, and Juventus and Barcelona have won the Italian and Spanish leagues 10 times each. Further, England has only had four unique winners during that time, Spain, Italy and Holland have had five, and Germany six. France’s Ligue 1 is the only league with more diversity—it had 10 different winners in 20 seasons.There must be a sweet spot of upsets and competitive balance.

Examining winners may be too simplistic to come to any significant conclusion. Another way is to look at the diversity of teams in the top four places at the end of each season. From 1995–96 to 2014–15, the same four teams account for an astonishing 80% of EPL, 76% of Eredivisie, 68% of La Liga, 65% of Bundesliga, 65% of Serie A and 58% of Ligue 1 top-four finishes. In terms of unique top-four finishers, 16 different teams have finished in the top-four of Ligue 1 and 15 different teams in La Liga. Conversely, just 10 unique teams have finished in the top four of the EPL and Eredivisie. This analysis of the more successful sides in each league would actually suggest that the EPL is the least competitive league, while Ligue 1 is the most competitive.

But perhaps focusing on the top teams is a too restrictive view of “competitiveness.” To get at the common refrain “anyone can beat anyone on their day,” a more appropriate analysis might factor in the performances of the weaker teams. To do this, we examined the success of the bottom four teams in each season when playing against the top four teams. We asked how many points the bottom four teams were able to accrue in games against the top four. The results can be seen in the graph above.

To get an even fuller picture of competitive balance, we can also look at the relative performance of all teams in a league in each season. To do this, we use a metric borrowed from the economics literature—the Gini coefficient. The Gini essentially describes the inequality in a group, and is often used to describe income inequality.

If the relative difference between individuals of incremental ranks in some outcome measure (e.g., points gained in a season) is generally equal, then the Gini will be close to zero. But if this outcome measure is distributed highly unevenly then the Gini too will be higher. The Ginis of each league from 1995–96 to 2014–15 are shown above.

The EPL may well be the most popular in terms of worldwide audience, but, from our analyses, this is not because of “competitive balance” or “upset likelihood.” In actuality, a strong case could be made that all other leagues—with the possible exception of the Dutch Eredivisie—are far more balanced.

After our analysis the question still remains: Why is the EPL so popular? Perhaps it could be as simple as the league’s higher scoring. Fans love goals, after all.

While the EPL was historically a high-scoring league, it was never as high-scoring as the Spanish league. Over the last 20 or 30 years, the EPL is actually very similar in goals per game to La Liga. During the same period, the more competitive French league has relatively low scoring, whereas the less competitive Dutch league has been relatively high scoring.

It appears that the disproportionate popularity of the EPL may not be due to competitive balance, upset likelihood or high scoring. What’s more, the most competitive league—Ligue 1—is relatively unwatched outside of its own country. Equality certainly does not equal quality.

In the end, perhaps the answer to English soccer’s popularity lies beyond the database. Perhaps the key is in the aesthetics. The data disproves a few popular notions, but it can’t ultimately prove that it is the tumultuous physical nature of English soccer combined with the English fans’ vocal energies and fanatical loyalties to their clubs that makes the EPL the most visually appealing broadcast spectacle in the world.

I've touched on the UCL and title disparities but I think this data about the competitiveness of lower teams is far more interesting, or at least newer to me. With that plausible and un-rebutted argument has been re-cycled forever, you come bearing fresh ammo!

Other reasons for Prem's popularity: People like the fact the Premier League presents itself as the only thing that matters, even experts can't keep track of all of Europe, but fans can feel informed about 20 clubs (presentation of Prem closer to NFL/NBA model). It's the only top league in an English-speaking country (emphasis on English, and the sugar-high addiction that is broadcasts in Brit-patois). It's become the global language, and demographics of English speakers were always more influential/wealthy. The first live soccer TV broadcast happened in England in 1937, Match of the Day first aired in 1964, aka the English perfected presenting their product before other countries even got their pants on, and no one does a better job of making trivial encounters on Tuesdays at Stoke seem vital to the course of human history like the Prem.

If Leicester wins, it will be the first time any city outside Manchester or London celebrates a Premier League title since Blackburn won in 1994-95. And. Over the last 11 seasons just five clubs have claimed 43 of the 45 Champions League berths: Arsenal, Man U, Man City, Chelsea, Liverpool. (Everton in 2005 and Tottenham in 2010 are the only exceptions.)

you missed the metric that matters: payroll. The EPL has the highest payroll.

My second suspect stat: English commentary and the English language. The German league has a huge number of eastern European players with "unpronounceable names" compared to the other leagues.