Laleh Khalili is a professor at the University of London in the Department of Politics and International Studies. Over the past year, I have read her work, including Time in the Shadows: Confinement in Counterinsurgencies (Stanford University Press, 2013), in my graduate work in the field of American Studies. In my journalism on the counterinsurgency operations being waged within the United States by way of militarized police and mass incarceration, I’ve come to think of Khalili as a security expert whose insights are as necessary to read as those of contemporary journalists like Glenn Greenwald and my Guardian US colleague Spencer Ackerman.

Steven W. Thrasher: Can you tell me a bit about yourself and your background. Where were you raised? How do you identify in terms of race, ethnicity, nationality, language, and gender?

Laleh Khalili: In some ways my scholarship reflects my peripatetic life. I have spent a third of my life in a provincial city in Iran; a third in various places in the U.S., culminating in New York; and a third in the U.K. where I now live. The largest geographic unit with which I identify is the city in which I live—and so I am a Londoner these days. I have a fairly untroubled relationship with my own womanhood, but I have reflected a great deal and in troubled ways on how this womanhood is reproduced or reshaped through engaging the kinships in my life (with parents, siblings, children, friends, and lovers). I mark “Other” on all multiple-choice questionnaires that ask me about my ethnicity; I have no religion; and my citizenship status often depends on which border I am crossing. And for reasons I don’t always fathom, I have not suffered discrimination on the basis of my gender or background or nationality. Even the fact that I chose to work on Israel/Palestine for my doctoral research did not influence my ability to secure academic employment, because by then I was living in the U.K., where policing political or scholarly discourses around Israel/Palestine is far less pernicious and pervasive than it is in the U.S. (where I completed my doctorate).My scholarship bears the marks of my own personal history. My parents were political prisoners and later immigrants. The experiences of confinement and of border-crossings are shot through all my writings.

My scholarship bears the marks of my own personal history. My parents were political prisoners and later immigrants. The experiences of confinement and of border-crossings are shot through all my writings.

SWT: Your colleague Lisa Hajjar has mentioned that she’s often asked to weigh in on feminism or “women’s issues” by popular press as if she doesn’t work on security and the military. I’ve seen in journalism, there aren’t a lot of women writing about and studying security… or rather, there aren’t a lot of women allowed to be visibly and publicly seen as security experts. Why do you think this is?

LK: Many disciplines are deeply gendered. “Security” or “terrorism studies” are certainly gendered masculine; but so is political economy. Women are supposed to work on gender, on human rights, on “soft” stuff. Men are supposed to do the “hard” subjects like violence, or militaries, or the economy. However, this is changing in very dramatic ways. Some of the most exciting new scholarship in international relations and critical security studies on everything from torture to arms control to logistics to war-fighting is being written by women.This sort of security drag is anything but progressive when the woman in question is an interventionist, a hawk, a theoretician of pacification.

In any case, it is really not whether a person gendered as a woman doing the hard stuff that matters. It is the content and politics of their work. In fact, within a whole range of fields of study and practice having to do with defense, counterinsurgency, warfare, etc., it is women who are taking the center stage, precisely because they consider it “sexy” for women to do this kind of “hard” work. This sort of security drag is anything but progressive when the woman in question is an interventionist, a hawk, a theoretician of pacification. The best example I can give is of all the women academics and military/defense practitioners who were great advocates and promoters of the counterinsurgency manual produced by General Petraeus and his acolytes in 2007.

SWT: In Time in the Shadows, you examine four modes of operations for controlling populations via counterinsurgency: detention camps, extraterritorial detention, invisible or proxy detention, and mass confinement.

LK: When I was reading the countless accounts of counterinsurgency wars throughout the long twentieth century, it seemed to me that there were distinct ways in which a prisoner of war camp in a counterinsurgency differed from extraterritorial detention (on islands or brigs) and they still differed from prisons that were run by proxy forces. Each of these detention centers served a specific function: POW camps swept populations and took all “military-aged males” (an actual administrative category) out of the general population; extraterritorial prisons provided a degree of freedom from scrutiny, accountability, and law; and proxy prisons provided an opportunity for extraordinary violence combined with the plausible deniability that using a client provides.

All of these differed from the mass detention of civilians, which changed from massive programs of resettlement into in-situ imprisonment. So, not only Gaza, or the walls surrounding The West Bank, but also all the walls, barbed wire fences, sand berms, and electronic gates that encircled Fallujah and Tal Afar in Iraq and the crisscrossing of Baghdad with walls that separated and segregated neighborhoods. These programs were intended not only to pressure the civilians to support the counterinsurgents, but ultimately they were social engineering programs effective on a far larger and longer scale than the detention camps mentioned above.

SWT: What do you make of the mass, racialized confinement of 2.2 million people within the U.S.? Do you see a counterinsurgency strategy at work with the mass confinement of African Americans?

LK: Interestingly, the kind of mass confinements that characterize the U.S. carceral regimes have some similarities with mass detention of civilians—but these are mostly in the methods of surveillance and bureaucratic control used against the detainees in both instances. But the origins of these forms of mass detention are distinct. The carceral system in the U.S. is a disciplinary regime entirely intended to pacify the African-American population and which has extensive historical roots going all the way back to slavery.

SWT: Since the Time in the Shadows book was published, which of its conclusions predicted the Afghanistan, Iraq, and Palestine of November, 2015? Does anything now surprise you?

SWT: Your book came out just a couple of years before Guantanamo Diary [by Mohamedou Ould Slahi]. What, if anything, did you know about Slahi when you published your book? Would you have changed or added anything if you had known more?

LK: I would have loved to include his own voice, this articulate, witty, moving account of day-to-day life in the prison. His wonderful book has confirmed many of my arguments, but would have added a depth of personal experience to the book. That said, when I wrote the book, a number of memoirs, volumes of poetry, and personal accounts of former prisoners had already been published on which I drew liberally.

SWT: Let’s talk about your 2014 Social Text article The Uses of Happiness in Counterinsurgencies. I am endlessly intrigued by your idea of “the utility of happiness, a colonial style and a technocratic one.” What inspired you to start looking at happiness in this way?

LK: I have become very interested in affective landscapes created in the crucible of war but also deprivation. Also, in reading through texts written by counterinsurgents I was really and truly struck by how often “happiness” came up as an index of success of counterinsurgency. I had to write about this in a way that made sense of it. 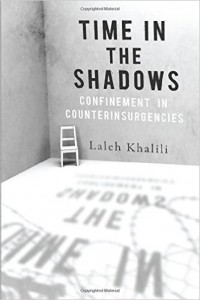 SWT: Your section on drinking tea to “win hearts and minds” reminds me about the recent push, including by President Obama, for more “community policing.” Do you see community policing as a form of counterinsurgency? Your works came out before Ferguson, Missouri blew up the Black Lives Matter movement. Any thoughts on what you’ve seen in Ferguson, Baltimore, and elsewhere in the U.S. as it relates to what you have seen the U.S. wage overseas?

LK: Of all the things you have mentioned, the violent forms of policing unleashed along racial vectors, using militarized means, tactics, and weapons and against racialized bodies in the U.S. comes closest to counterinsurgency. They have a great deal to do with the U.S.’ wars overseas. Aside from the interchangeability of the personnel and the weapons, many police departments consciously adopt precepts of urban pacification from the militaries and think tanks like RAND aid this conflation.

Contexts board member Steven W. Thrasher is in the American Studies program at New York University and is the Writer At Large for the Guardian US.

At this time it sounds like BlogEngine is the preferred blogging platform out there
right now. (from what I've read) Is that what you are using
on your blog?

Contexts board member Steven W. Thrasher is in the American Studies program at New York University and is the Writer At Large for the Guardian US.