Shifts toward privatization in U.S. public sector institutions over the last two decades have been profound. Elements of the military and the prison complex, for instance, have been outsourced to private, for-profit companies, while public education has seen similar transformation under the guise of “choice.” Public sector workplaces and their employees have experienced these pressures first hand.

Most obvious in this regard have been recent statewide political efforts, as in Ohio by Governor Kasich and Wisconsin by Governor Walker, to scapegoat public sector labor unions and workers. Reflective of broader privatization pressures, the consequences have included substantial reductions in workplace benefits and protections as well as significant and growing racial inequalities—inequalities for those traditionally protected by equal opportunity mandates that have been in place since the Civil Rights Act of 1964.

Such downturns in benefits and protections and the uptick in racial inequalities are a direct result of the application of a “business model” to nearly all domains of social life. Perhaps most importantly for employment, this model promotes on-site manager/employer discretion to hire, fire, and promote, and in a context where bureaucratic protections governing traditional employment conditions are being dismantled. The outcome, proponents suggest, is “lean and mean” organizations with enhanced efficiency in decisionmaking. The costs in terms of employment conditions and security for all public sector workers and for racial equity in contemporary employment, however, are considerable and have been eclipsed in the name of this new, supposed efficiency.

In the post-1965 civil rights era, workplace environments were governed by formal procedures and centralized decision-making that reflected a “public service” model of employment, particularly when it came to protections in employment status and due process rights. Under this model, employees were often “classified” or “non-exempt.” This meant that they had “property rights” in their jobs, such as: (1) tenure, which restricts worker termination to “just cause” reasons, and (2) the ability to invoke equal employment opportunity laws to dispute decisions and unfair treatment in hiring, wages, harassment, promotion, and firing. During the 1980s, approximately 70 percent of federal employees had such protections. Those without were either still in a probationary period in new jobs or temporary workers.

The current “reinventing government” agenda has lead to sweeping changes in how federal and state sector organizations operate. For workers, this has meant growing vulnerability to job loss and mistreatment due to: (1) an expansion of declassified status; (2) an expansion of at-will employment; and (3) a contraction of grievance-eligible employment issues.

Ronald Reagan tried to undertake such changes in the 1980s, but made little progress. By the 1990s, however, Republican efforts gained traction and diffused rapidly with eventual bipartisan backing, according to scholars like Elaine Kamarck in The End of Government As We Know It (2007). While reform has varied to some degree across states and federal government agencies, the extent of the overall change between the 1990s and mid-2000s is staggering. 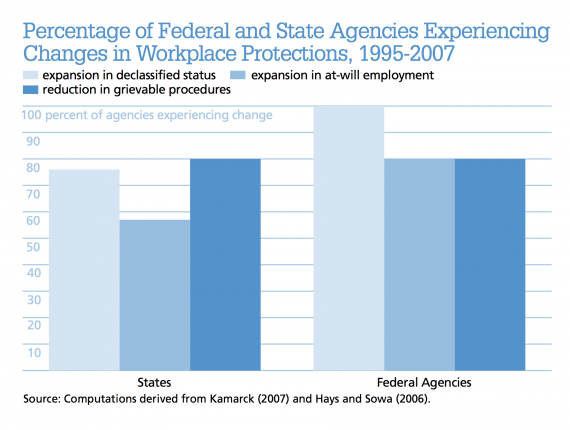 The chart above reports that workplace protections contracted at federal and state levels. Between 75 and 80 percent of states declassified employees and limited grievable employment issues generally, while over half expanded “at-will” employment, which pertains specifically to firing and removes the right of appeal. Similar changes—changes that curtail workplace protections and worker power—across the largest six federal agencies (Federal Aviation Administration, Internal Revenue Service, General Accounting Office, NASA, and Departments of Defense and Homeland Security) have been even more pronounced.

Such workplace reforms prioritize efficiency- and profit-centered logics, compromising workers and the tradeoff in job security and protection that public sector workers once enjoyed compared to their better-paid private sector counterparts. What has emerged for public sector workers is a context of increasing precariousness. While all public sectors employees are vulnerable, this is especially true for minority workers; these workers saw significant middle class mobility and relative racial equality during the 1970s and 1980s compared to their private sector counterparts, only now to find these gains receding.

Following the Civil Rights Act of 1964, the government, in an effort to remedy the exclusion and discrimination of the past, provided favorable employment opportunities for African American men and women. In doing so, the public sector offered a more equitable “occupational niche,” with a corresponding avenue for growth of the black middle class. Indeed, the historically favorable standing of African Americans in public sector employment is compelling. The presidentially appointed Glass Ceiling Commission (1995), for example, found that in the 1980s and 1990s African American men and women in public sector work were twice as likely as their private sector counterparts to receive promotions into white collar managerial/executive and lower white collar administrative/technical jobs. Moreover, and within most occupations, many experienced earnings and job authority at levels similar to whites. 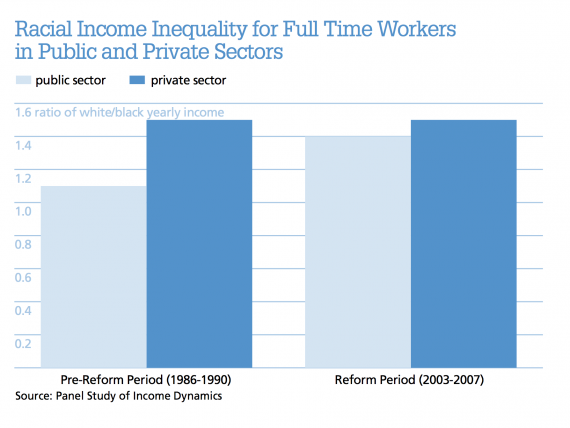 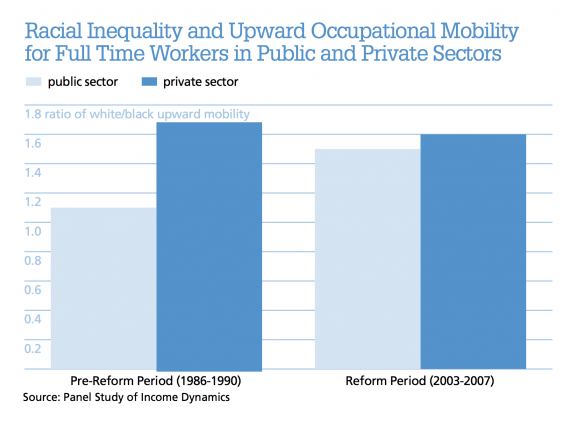 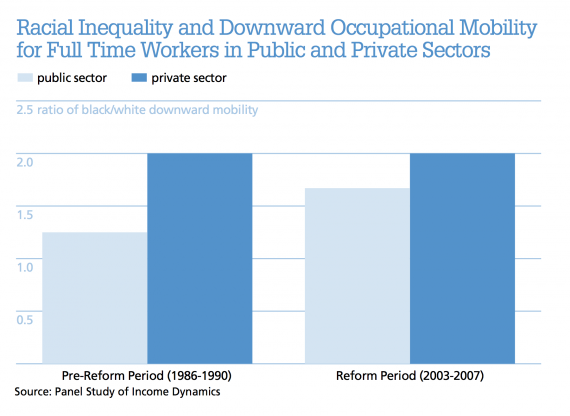 Recent reforms along with decreased protections and grievance accountability, however, have been devastating. The charts above compares levels of public versus private sector racial inequality between the Pre-Reform (1986-1990) and Reform Periods (2003-2007), and across three pivotal indicators of workplace rewards: yearly income, upward mobility and downward mobility. Income is measured in dollars for those consistently employed. Upward and downward mobility reflect occupational promotions (upward) or demotions/ firings/layoffs (downward). We report in each panel racial ratios—a common way to measure inequality—derived from analyses of the nationally representative Panel Study of Income Dynamics and that control for potentially confounding individual-level factors and unionization. We have also replicated these patterns with other nationally representative data sources (IPUMS).

In addition to these immediate negative effects, the implementation of new governance and privatization are translating into a series of long-term disadvantages. Unlike whites, African Americans have no alternative location or sector in the U.S. labor market where they have been as protected or have received as equitable treatment when it comes to mobility and earnings. Such declining opportunities and resources—wrought by the push toward privatization and a corresponding undermining of workplace rights—threaten the decades-old ability of African Americans in the public sector to accumulate the financial means to blunt discrimination and pave the way for the orderly transmission of economic status to the next generation. Such transmission of status is crucial for minority well being in this country.

Privatization-based reforms have undermined public sector workers’ rights and security and eroded grievance avenues and Civil Rights gains historically achieved by minorities. Assuming that reform continues, it is crucial that workplace protections are re-fortified and that collective bargaining rights be created, maintained, and bolstered as a necessary counterweight. Although perhaps difficult to envision, public sector workers do have potential leverage here. After all, these workers serve the public interest. They and their allies should claim that importance loudly and passionately, and in a manner that resonates with public audiences more so than the shallow declarations by political demagogues that profit, efficiency and privatization should trump all else.

To the extent that new business model governance remains the dominant organizational strategy, its calls for “bottom line” results and efficient practices must be balanced with the need (and, indeed, mandate in law) for equality in employment opportunities. Especially important, we believe, is diversity accountability and opportunities to contest managerial discretion in employment practices. As work by sociologists like Alexandra Kalev and Frank Dobbin suggests, incorporating procedural safe-guards such as professional counsel as part of due process and formal review and oversight boards with sanctioning and monitoring capability may help to ensure at least some measure of justice in the employment relationship—justice not simply for minority workers, but for all workers.

Vincent J. Roscigno is in the department of sociology at The Ohio State Univer- sity. He is the author of The Face of Discrimination: How Race and Gender Impact Home and Work Lives.

George Wilson is in the sociology department at the University of Miami where he stud- ies race-based mobility and inequality in employment.

Vincent J. Roscigno is in the department of sociology at The Ohio State Univer- sity. He is the author of The Face of Discrimination: How Race and Gender Impact Home and Work Lives.

George Wilson is in the sociology department at the University of Miami where he stud- ies race-based mobility and inequality in employment.