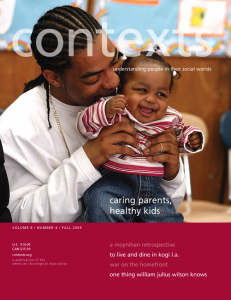 Our Fall 2009 issue explores the realities of an aging society, the health of fathers and their children and the impact of the “breast is best” campaign. Also in this issue: a retrospective on the Moynihan Report, a report on the state of global sociology from Taipei and an examination of Turkey and Islam’s place in Europe.
Download this issue
Previous Next

The Internet Can’t Teach What The Social World Can

An avid blogger and author on race and media, Jessie Daniels’ recent work looks at how students react to websites of white supremacy groups. She … Read More

do ties still bind? In 2004, nearly one-quarter of Americans reported they couldn’t discuss personal issues with anyone in their lives. Or so the survey … Read More

The Moynihan Report, A Retrospective

A group of sociologists recently revisited the controversial 1965 Moynihan Report on black Americans. Despite its vilification at the time, social research has found that Moynihan was right about more than he was given credit for. Read More

Every issue we provide a roundup of sociologists, and sociology, in the news. This issue highlights a Russian sociologist fired for exposing corruption among … Read More

Cities serve practical, functional, symbolic, ritual, and ideological ends, all with an undeniable visual dimension. Therefore, the city can literally be looked at from different … Read More

Challenges For A Global Sociology

Sociologists from around the world met in Taipei, Taiwan, last March to discuss the issues that unite and divide the field across national lines. Unequal resources, regional differences, and state regulation of scholarship emerged as key points of conflict and convergence. Read More

Turkey, Islam, and the EU

Contrary to the "clash of civilizations" thesis, social scientists have found that Islam and democracy are not inherently in conflict. Controversy over Turkey's application to the European Union highlights how concerns over cultural difference impact EU policy decisions. Despite claims to the contrary, Turkey is more similar to Europe than many assume. Read More

Breastfeed At Your Own Risk

Fathers have a greater impact on the health of their children than most of us realize. Research from sociology and other fields has shown that men's attitudes and behavior have both direct and indirect effects on their kids' health. Factors influencing their children's health included the men's reproductive health, risky employment, masculine ideals of body image, and care-giving roles. Given the potential for men to influence children's health for better or for worse, efforts are needed to educate and encourage fathers to engage in healthier behaviors. Read More

Facts and Fictions About An Aging America

The Macarthur Foundation Research Network on an Aging Society | Feature

Sociologists and others studying aging in the U.S. uncover myths that dominate public perceptions of the elderly. Educating our society about the facts on aging is a necessary step to ensure that future policies will promote a more equitable and productive America for all ages. Read More