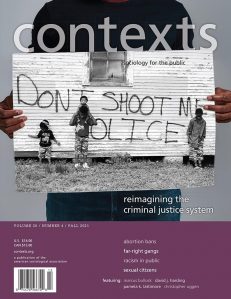 One of the most striking developments in modern American history is the rise of mass incarceration. While more and more people have been put behind bars worldwide, sadly, America leads the way. In this issue, we contribute to the ongoing discussion on mass incarceration and its impacts with a series of articles drawn from a recent conference jointly held by the Brookings Institution and the American Enterprise Institute. This collection of articles will address different elements of the American criminal justice system and ask, is there a way forward?
Download this issue
Previous Next

Ibtihaj Muhammad is an American sabre fencer, and a member of the United States fencing team. She is best … Read More

The Social Roots of Sexual Violence‎

Proud Boys in DC on December 12, 2020 protesting the presidential election in support of Trump. On January 6, … Read More

Photo by julientromeur. (Source: Pixabay) “There is wide socioeconomic variation among LGB people that has been overlooked by previous … Read More

From the Criminal Justice System to Entrepreneurship

CEO of the Flikshop app, TED speaker, and Techstars alumni. (Photo courtesy of Marcus Bullock) I had the opportunity … Read More

A school police vehicle. (Photo by Rescuenav via Flickr, cc). This article originally appeared in a report by The … Read More

Fall 2021 Letter From the Editors

Fabio Rojas and Rashawn Ray, Editors of Contexts Magazine. (Photo by Alisha Kirchoff) One of the most striking … Read More