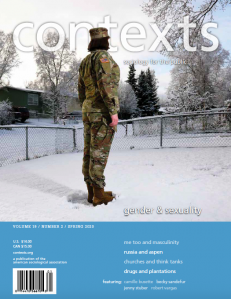 Gender is both explicitly and implicitly expressed in the groups that we interact with, and in the social institutions where we find ourselves. Every society develops rules and ways of talking about gender. Often, they can be innocuous; however, many times, words and categories become the basis for creating and enforcing boundaries. In some communities, gender divisions become the basis for an incredibly rigid line of demarcation and, in other communities, violence. It’s safe to say that most communities have a long way to go toward true gender equity.
Download this issue
Previous Next

Intimacy on the Mats and in the Surf

Matt and Chris The bell rang out, signaling the end of the final round of sparring—an exhausting combination of striking and grappling. Matt and Chris … Read More

Disparate rates of morbidity and mortality among racial groups are both a cause and a consequence of racial inequality. Previous research has shown that children … Read More

Gender Sucks for You and Me

When women enter into an occupation that has previously been male dominated, it can be described as becoming “feminized.” While individual women may benefit from … Read More

Research has shown that half of all jobs in the U.S. are found through networks of individuals or informal channels, i.e., friends, relatives, and acquaintances. Read More